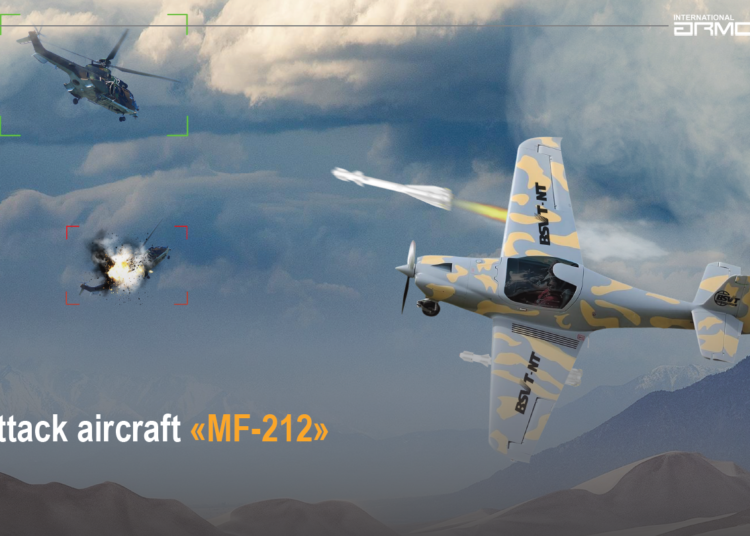 The aircraft is made entirely of carbon composites and embodies the best engineering solutions for aerodynamics, layout and control in its design.

Despite the Nigerian Air Force’s refusal to go along with, the land force’s aviation plans, the Nigerian Army will be getting a fixed-wing aircraft for aerial surveillance and ground attack.

The Nigerian Army has been marked down to receive three MF-212 ISR and attack aircraft, as well as three Bell UH-1D transport helicopters.
These acquisitions are part of the 2023 Budget proposal submitted by Nigerian President Muhammadu Buhari to the National Assembly. When approved and acquitted, the aircraft will be the Nigerian Army’s first fixed-wing aviation assets to aid its fight against Violent Extremist Organizations (VEO).

The MF 212 aircraft and Bell UH-1D helicopters may be the vanguard of a long list of aviation platforms the army will acquire which include drones and attack helicopters. Nigeria is set to receive six brand-new T-129 ATAK helicopters from Turkey and 12 new AH-1Z Viper attack helicopters from the United States. The Nigerian Army may also be the recipient of the newly acquired Bayraktar TB2 drones from Turkey for the recently formed UAV command. The Army’s new UAV command will raise, train and sustain a UAV force which will ensure task competency to deliver precise and timely Air Imagery Intelligence.

For now, it is not yet certain if the new Nigerian Army UAV command will operate alongside the Nigerian Air Force Combat Reconnaissance Group (203 CRG) in Gombe state. The Nigerian Army has been known to operate several commercial-grade drones sourced from the civilian market.

Getting to the approval phase completes a protracted and tumultuous journey to acquire these aerial assets to bolster the air force’s counter-insurgency capabilities. The overall military structure has been immensely enhanced over the past few years. The army has received its fair share of main battle tanks, and a wide range of armoured combat vehicles, while the air force has acquired several air combat platforms like the multirole JF-17 Thunder fighter jet from Pakistan, and A-29 Super Tucano from the United States.

In 2020, the Nigerian Army announced that it was planning on procuring combat platforms particularly attack helicopters to support and provide rapidly deployable firepower to its field-deployed troops in the northeastern theatre. At the time, the Army blamed the lack of air power as the reason for the lengthy counter-terror fight, opining that it needs its own air capability to sustain and wrap up the military campaign.

The two-seat MF-212 is a low-wing aircraft with fixed, non-retractable landing gear and a cabin in which the crew is located side-by-side. It is designed for patrols, detection and control of small manoeuvring air targets, and countering illegal armed groups.

The MF-212 attack aircraft carries guided missiles R-60-NT-L with the semi-active laser seeker and R-60-NT-T with the thermal imaging seeker. Both missiles are equipped with a new multi-beam laser proximity fuze that provides a continuous field of view, which significantly increases the probability of engaging small targets.

The aircraft will support the Army’s offensive by providing air support to the infantry and armour by eliminating terror elements, providing aerial surveillance, and targeting data for the national force’s artillery.

The United States National Guard has already pledged to support the fledging Nigerian Army aviation, the Adjutant General of California National Guard, Maj.-Gen. David Baldwin made the pledge when he led his team on a courtesy visit to Army Headquarters, Abuja in December last year. Regarding the Army Aviation endeavour, Major General Baldwin noted that “It is surprising that an army as large and sophisticated as this that you don’t have your own and we think that it is very important that we continue to leverage on our expertise. “We have very large aviation and in California, we have an aviation brigade that supports over 100 aircraft over half of which are in the army.

ALAT operates a mix of both armed and unarmed helicopters numbering up to 339. This is similar to what the Nigerian Army seeks to establish. In 2005, ALAT received its first Eurocopter EC665 Tiger, it also flies cannon and Mistral-armed SA341 Gazelles, Pumas, and Eurocopter Cougar.