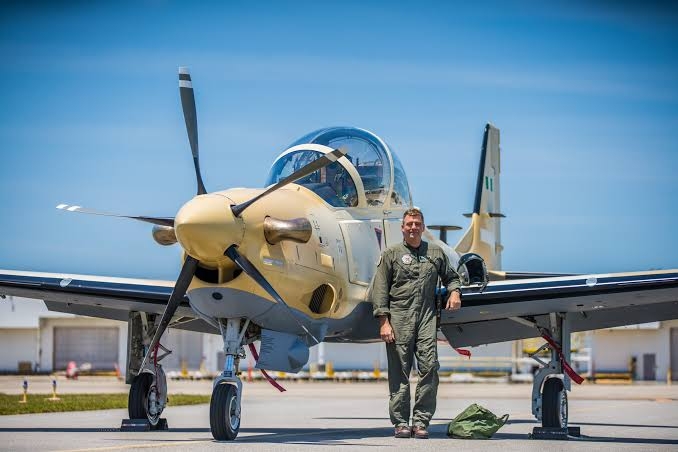 Nigerian Air Force A-29 Super Tucano fleet is set to arrive the country by mid-July and beyond. The A-29 alongside the newly delivered JF-17 Thunder multirole figher will form the core of the Nigerian Air Force (NAF) offensive aerial component, particularly as part of the ongoing joint counterterrorism operation.

This article details the timeline of the A-29 Super Tucano from the day the deal was struck up till the day of delivery which has been set in July 2021.

The EMB 314 Super Tucano, (export name A-29), is a turboprop light attack aircraft designed and built by Brazil’s Embraer as a low-intensity combat aircraft designed to be a low-cost system capable of a variety of missions including ground strikes, aerial interdiction, intelligence, surveillance and reconnaissance (ISR) roles, as well as limited air defense duties (against helicopters and light turboprop aircraft).

The aircraft is able to fulfill this missions with a plethora of armament like precision-guided munitions, bombs, rockets and machine guns.

To meet export demands, asides its factory in Brazil, Embraer has set up a production line in the US in conjunction with Sierra Nevada Corporation to manufacture A-29s.

With more than 10 years in action, the Super Tucano has gained an excellent performance record with over 230,000 flight hours and 30,000 combat hours. According to the Embraer, the A-29 Super Tucano is currently used by 10 air forces.

In November 2018, SNC was awarded a $329 million Foreign Military Sales contract from the US government to build 12 A-29 Super Tucanos for the Nigerian Air Force.

The Super Tucano deal wasn’t without its own issues, in 2015, the leadership of the Armed Forces took a decision to replace the ailing Alpha jet platform of the with the newer A-29 Super Tucano, but the United States vetoed the deal, citing human rights issus with the military. The US also blocked Goodluck Jonathan from acquiring Boeing CH-47 Chinook and Bell AH-1Z helicopters from Israel in January 2015.

An act known as “Leahy Law” prohibits the US defence sector from providing military assistance to countries involved in human rights violations. The US Government at the time stated that it was not pleased with measures adopted against those accused of human rights abuse in the operational areas of the North-East.

After the issue was resolved and the US relaxed its stance, the US Department of Defense (DoD) in December 2018 awarded Serra Nevada Corporation (SNC) $329.08 million for 12 aircraft, with a further USD15.65 million earmarked for forward-looking infrared (FLIR) sensors on six aircraft.

As the A-29 program progressed, the multi-mission platform showcased that it was capable of performing various types of combat roles with minor modifications.

The A-29 Super Tucano aircraft gained the capability to shoot down drones, cruise missiles, and light aircraft after one of its integral weapon systems the AGR-20A Advanced Precision Kill Weapon System (APKWS) shot down a drone during testing at the its Air Combat Command’s 85 Test and Evaluation Squadron Eglin Air Force Base, in 2019.

The Advanced Precision Kill Weapon System (APKWS) is a combat-proven, semi-active laser-guided 70 mm air-to-surface rocket system designed and manufactured by BAE Systems in collaboration with the US Government.

Originally developed as a low cost, low collateral damage air-to-ground weapon, due to its limited range, the AGR-20A can be used only at short range and in good weather conditions.

The Advanced Precision Kill Weapon System (APKWS) as well as the GBU-58 Paveway II guided bombs are both part of the weapons package for the 12 the Nigerian Air Force Embraer A-29 Super Tucano light strike aircraft.

Jackson Schneider, president & CEO, Embraer Defence & Security stated during the flight that, “the aircraft met or exceeded all the requirements and we are very pleased with the successful flight,” stated Ed Topps, vice president of Tactical Aircraft Systems and programs for SNC’s IAS business area. “SNC and our partner, Embraer, are certain the Nigerian Air Force will be pleased with these aircraft.”

A-29 Super Tucano facilities in Nigeria

In September 2020, it was revealed that the Nigerian Air Force A-29 Super Tucano will operate from the Kainji Air Base located in the western state of Niger at the southern end of Kainji Lake.

The United States Air Force then began construction of the facilities needed to support Nigeria’s new A-29 Super Tucano air wing. The contract for the construction was awarded by the US Air Force Security Assistance and Cooperation Directorate’s Foreign Military Sales Construction Division to the United States Army Corps of Engineers, Europe District, worth $36.1 million.

The contract for the construction was awarded by the US Air Force Security Assistance and Cooperation Directorate’s Foreign Military Sales Construction Division to the United States Army Corps of Engineers, Europe District, worth $36.1 million.

Later on, Embraer suffered a setback when hackers gained access and leaked some of the Brazilian company’s private files after Embraer refused to negotiate and pay ransom demands.

This incident occurred in the early hours of December 30, data stolen from the site includes samples of employee details, business contracts, photos of flight simulations, and source code, among others.

A 4.4mb worth of data of Nigeria’s A-29 Program was also stolen, which according to ZDNet were shared on the dark web by RansomExx (also known as Defray777), a ransomware gang.

So far, last month the United States Army Corps of Engineers (USAGE) recently established a permanent presence in Africa to oversee key U.S. Africa Command (AFRICOM) projects which included the construction of new facilities for the A-29 Super Tucano wing at Kainji Airbase.”

U.S. Europe District Project Engineer Adewale Adelakun began setting up his office in November 2020 and is now fully in place.

“To be there on the continent is a huge step forward in order to deliver high quality construction to our stakeholders,” Adelakun said.

The US is working to deliver A-29 Super Tucanos to the Nigerian Armed Forces, and Nigerian pilots are currently training on that aircraft with US Air Force Pilots at Moody Air Force Base in Georgia, USA.