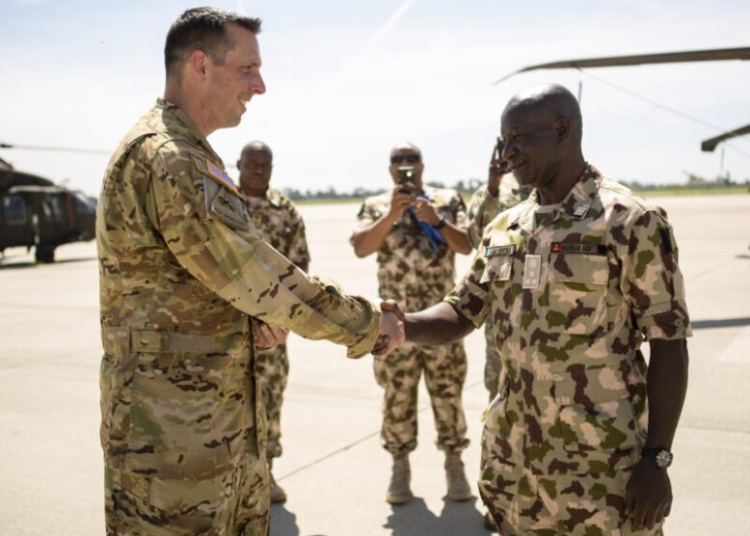 The Adjutant General of California National Guard, Maj.-Gen. David Baldwin, has pledged the readiness of the US military to support the Nigerian Army to actualise the establishment of its aviation unit.

Baldwin made the pledge when he led his team on courtesy visit to Army Headquarters on Tuesday in Abuja.

He said the California national guard had enjoyed mutually beneficial partnership with Nigeria since 2008, adding that the partnership had grown stronger each passing year.

According to him, the purpose of his visit is to strengthen the existing partnership for mutual benefit.

“We are partnering with the whole of the armed forces of Nigeria as well as the ministry of interior agencies.

“One number one priority remained helping you to develop an army aviation programme.

“It is surprising that an army as large and sophisticated as this that you don’t have your own and we think that it is very important that we continue to leverage on our expertise.

“We have a very large aviation and in California we have an aviation brigade that support with over 100 aircraft over half of which are in the army.

“We want to leverage on that to help you develop your programme to have the aircraft that you need and be able to deploy them appropriately in providing security for your country,” he said.

The adjutant general said the California national guard would also support Nigerian army in its counter insurgency operation through joint training on intelligence and other areas.

He also pleaded to partner Nigerian army to enhance its capabilities, like night fighting equipment, cyber warfare and logistics.

Responding, the Chief of Army Staff, Lt.-Gen. Faruk Yahaya, thanked Gen. Baldwin and his team for upholding the relationship between Nigeria and U.S. for about 18 years.

Yahaya said the Nigerian army was looking forward to strengthening the relationship for mutual benefits of both armies.

He said that they had had discussions on how to partner in the areas of equipment, training and other important areas.

The COAS said that Nigerian army believed that having an aviation unit would help to enhance its operational efficiency.

In the area of training, he said the Nigerian army was committed to developing the competency and skills of Senior Non-Commissioned Officers, adding that California national guard could be of great support.

“We look forward to a more robust relationship between Nigerian army and the California national guard,” he said.

The Nigerian Army is in the early stages of building its own aviation program to support and provide rapidly deployable firepower to its field-deployed troops in the northeastern area.

At that time, Lieutenant General Tukur Yusuf Buratai (rtd) said that the Nigerian Army had acquired two helicopters toward the actualisation of its Aviation wing, but he declined to mention the type.