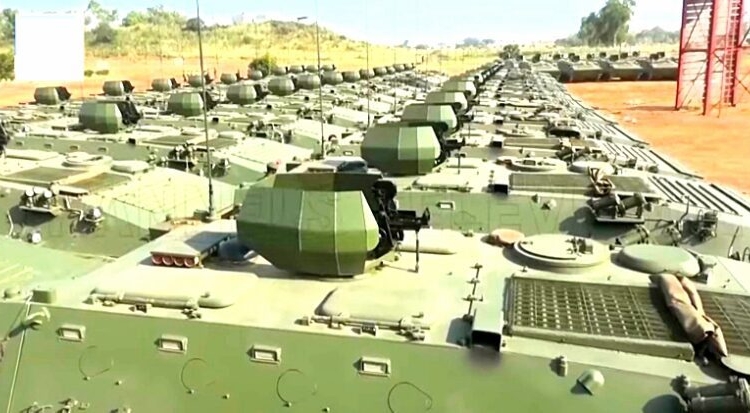 The Nigerian Army has put into use sixty new Norinco Type-89 tracked armoured vehicles to boost its ongoing and future offensive in the northeastern region against insurgents.

The 60 recently acquired Norinco Type-89 tracked armoured vehicles were inducted into the Nigerian Army service on Thursday, October 29, at the Army School of Infantry in Jaji, Kaduna State.

Developed in the 1980s and entering around the 1990s, the Type-89 vehicle is largely inspired by Soviet-era designs. It is fully amphibious with propulsion once in the water, powered from its own track’s motion.

In it’s basic configuration, the Type-89s are armed with an externally mounted 25 mm cannon,12.7 mm machine gun on a 360-degree traversal turret, and a coaxial 7.62 mm machine gun. Although those acquired by Nigeria shows an empty gunner cupola in a semi-enclosed turret. Machine guns will likely be fitted later on.

The vehicle features a welded steel hull to protect its occupants from small arms fire (up to 12.7mm bullets) and artillery shrapnel. A crew of two, a driver and a commander, with passenger seating in the mid/aft-section of the hull for thirteen combat-equipped infantry.

During the induction, the Chief of Army Staff, Lieutenant General Farouk Yahaya, said the new vehicles will be a gamechanger for the armed forces in their campaign against enemies of the Nigerian state. He was represented by the Commander Infantry Corps, Major General Victor Ezugwu.

It will be immediately deployed to various theatres after more than 100 Army personnel conducted training over the last three months.

“These platforms commission here today is in addition to other equipment brought in for this purpose and underscores the strategic resolve to ensure that a state of normalcy is achieved across the country,” he said.

“Let me make it very clear that the Nigerian Army, under my watch shall continue to work assiduously with relevant stakeholders, partners and other agencies in the protection of the sovereignty of Nigeria.”

The Type 89s were first reported to be delivered around September when a video surfaced on social media showing several tracked IFVs being transported through Nigeria.

The plethora of hardware from Norinco cost an estimated $152 million in a deal signed in 2019.

This new acquisition highlights yet again the growing reliance on Chinese-made armament. China continuously maintains a solid foothold in Africa. Chinese weaponry is increasingly attracting patronage mainly as a result of its cost-effectiveness.