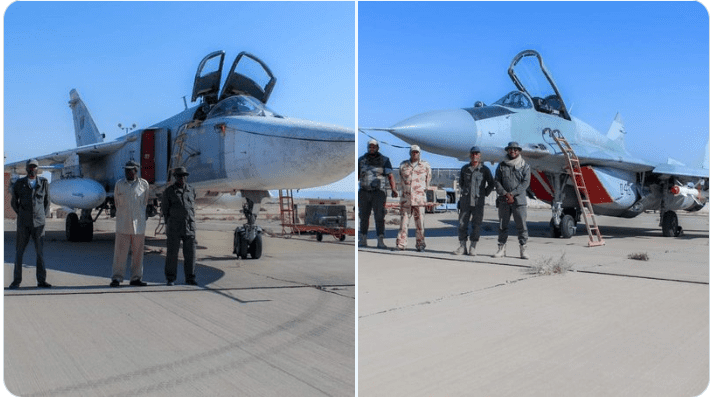 A recent photograph published by LNA at the Jufra Air Base, shows one MiG-29 'Fulcrum' fighter jet armed with R-73 & R-27 air-to-air missiles.

Airmen of the Libyan National Army (LNA) can now make use of a MIG-29 fighter jet and Su-24 Fencer strike aircraft now made airworthy. A recent photograph published by LNA at the Jufra Air Base, shows one MiG-29 ‘Fulcrum’ fighter jet armed with R-73 & R-27 air-to-air missiles, with the caption stating that they were now flyable.

The MIG-29 and Su-24 were delivered to the LNA in May 2020, and they are operated by mercenary pilots pending when LNA pilots will complete their training on the types. Fouteen MiG-29 Fulcrum fighter jets and Sukhoi Su-24 Fencer bombers were delivered by Russia to Libya during the 2019 civil war.

During the delivery, these warplanes were tracked from Russia, where they made a stopover in Iran’s eastern Hamedan airbase, arriving They then flew on to Russia’s Khmeimim airbase in western Syria, where social media photographs clearly showed that they were unmarked. Russian Air Force jets then escorted them to Al-Jufra airbase in Libya, which was controlled by the Libyan National Army (LNA) group led by General Khalifa Haftar. The MiG-29s arrived at multiple bases in LNA-controlled eastern Libya. In June, one of the Libyan-based MiG-29s had flown a mission over the strategic coastal city of Sirte. The delivery came as GNA forces attempted to regain control of the area before the opposing sides agreed to a ceasefire in August.

Till date, Moscow still officially denies transferring these warplanes to Libya, claiming at one time that the warplanes in Al-Jufra in May were restored aircraft from the old Libyan Air Force. However, Col. Chris Karns, U.S. Africa Command’s (AFRICOM) Director of Public Affairs, counter this asertion, stating that “Libyans never had MiG-29s or Su-24s in their inventory, so anyone who says they ‘fixed their old planes’ is not representing the facts.” (While Libya did possess Soviet-built Su-24s in the past it never possessed MiG-29s).

During the conflict, Russian pilots, flew the aircraft but in an unofficial capacity, especially as the jets was unmarked at the time. At the time, some Libyans speculated that the aircraft’s pilots may belong to the Russian Private Military Contractors (PMCs) known ostensibly as ‘Wagner‘, or possibly ex-Russian Air Force pilots hired by that group.

“There is concern these Russian aircraft are being flown by inexperienced, non-state PMC mercenaries who will not adhere to international law; namely, they are not bound by the traditional laws of armed conflict,” said Bradford Gering, AFRICOM’s director of operations.

At least two MiG-29 Fulcrum fighter jets, possibly piloted by shadowy Wagner crashed in Libya, says Rear Admiral Heidi Berg, U.S. Africa Command’s (AFRICOM) director of intelligence. One of the MiG-29 was apparently lost on June 28, while the other went down on Monday, September 7, 2020. It is not clear whether the two MiG-29s were shot down, suffered mechanical failure or crashed because of pilot error.

The MiG-23 Flogger which was formerly non-operational was made flyable by cannibalizing parts from other stricken aircraft. The MiG-23 later dubbed ‘Franken-Flogger‘ by LNA aviators was refurbished and made flyable again by attaching two sets of wings from different aircraft, on a separate centre fuselage. However, the much-loved MiG-23ML Flogger fighter/bomber aircraft was shot down by the Government of National Accord (GNA) forces using MANPADS (Man Portable Air Defense System) five months later.

Similarly, forces of the GNA, made two of Libya’s Mirage F-1s fighter jets flyable in June last year. The two Dassault Mirage F-1 fighters (serial numbers 502 and 508) along with its siblings had been effectively grounded since the Tripoli offensive in 2011 due to lack of spare parts.