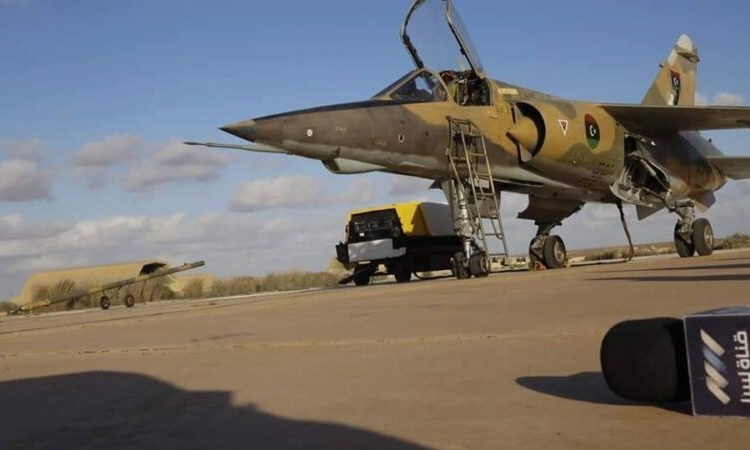 The two Mirage F-1 fighter jets were spotted flying in formation during a recently concluded military parade in Libya’s city of Benghazi, the second-most populous city in the country.

The two Dassault Mirage F-1 fighters (serial numbers 502 and 508) along with its siblings had been effectively grounded since the Tripoli offensive in 2011 due to lack of spare parts.

Most of Libya’s F-1s were initially stored at al-Watiya airbase which have been captured by forces of the Government of National Accord (GNA).

Al-Watiya air force base with its 43 hardened shelters was one of the few that was not destroyed during the NATO-led intervention in 2011 because housed almost exclusively decommissioned aircraft, which was classified as low-threat value by the NATO coalition.

The 38 Mirage F-1 fleet quickly fell into disrepair following scarcity of spares as well as the poor maintenance culture of the Libyan Air Force at the time.

Consequently, a pro-Gadaffi Mirage F-1ED fighter jet was shot down by the rebel forces on 2 March 2011 at Brega, leaving just one Mirage F-1BD trainer aircraft in possession of Gadaffi’s loyalist forces.

Two F-1s (502 and 508) aircraft had initially defected to Malta on 21 February 2011, and requested political asylum after defying orders by Ghadaffi to bomb protesters. They were piloted by two senior LPAF pilots, Colonel Ali al-Rabiti and Colonel Abdullah Salheen.

The two aircraft were later seen performing engine runs and high speed taxi trials on RWY 05/23 at Malta International Airport on Monday, 20 February 2012, departed from runway 31 and performed a flypast to bid farewell to the Maltese Islands before heading south toward Libya. The jets were finally returned to Libya on 21 February 2012, exactly a year to the day after they defected.

Some of the F-1s were brought back into operational status by pro-GNA forces in early 2015, using them alongside L-39ZO Albatross and MiG-23ML Flogger fighter jets extensively to bomb both ISIL and pro-LNA positions both outside and inside of the city of Sirte up till 2016.

ISIL had taken control of parts of northern Libya around the city of Sirte, but due to poor training and bombing tactics, the F-1 raids ended with limited results.

The F-1 woes started when pro-LNA forces captured al-Watiya air force base on 9 August 2014, from the Government of National Accord (GNA). Up to 12 decommissioned Su-22 bombers, several Mi-25 combat attack helicopters and possibly up to 21 decommissioned Mirage F-1ED fighter jets, as well as all spare parts and weapons for Mirage F-1ED and Su-22 aircraft, were seized by Haftar’s LNA forces.

This incident, severely crippled the pro-GNA air forces capabilities because now they lost their main source of spare parts for maintaining their Mirage F-1ED fighter jets and other aircraft.

When Government forces (GNA) recaptured al-watiya airbase from Haftar in 2020, and with the help of Ukrainian specialists overhauled and repaired some MiG-25 fighter jets and the two Mirage F-1ED (serial numbers 502 and 508) in 2017 and 2018 in order to bring them back to active combat service.

Unfortunately, on 3 June 2016, one of the two pro-GNA Mirage F1ED fighter jets crashed west of the city of Sirte due to technical problems, its pilot ejected safely.

A GNA Mirage F-1AD also crashed at al-Watiya air force base on 24 April was either shot down by pro-LNA forces, or crashed due to technical problems.

On 7 May 2019, pro-Haftar LNA forces using anti-aircraft guns shot down a pro-GNA air force Mirage F-1ED at Wadi al-Hira area near Gharyan, south of the Libyan capital of Tripoli.

The F-1ED took off from the pro-GNA Misrata air force base and its pilot, 29-year-old Jimmy Reiss, a Portuguese mercenary, ejected successfully and survived, and was then captured by pro-LNA forces.