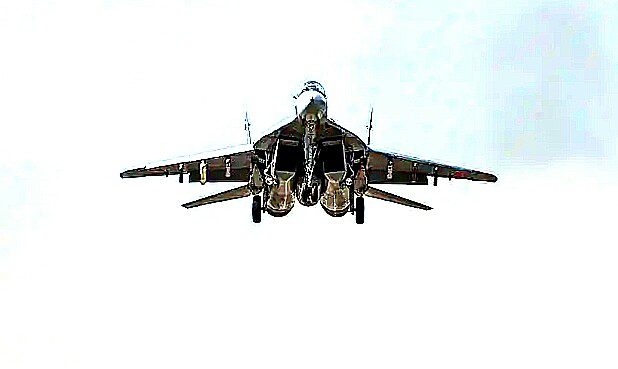 This was disclosed by Jared Szuba, the Pentagon correspondent for AI-Monitor, one of the MiG-29 was apparently lost on June 28, while the other went down on Monday, September 7, 2020.

Jared while citing information from Rear Admiral Heidi Berg, U.S. Africa Command’s (AFRICOM) director of intelligence, reported that it is not clear whether the two MiG-29s were shot down, suffered mechanical failure or crashed because of pilot error.

Coincidentally, a recent video clip which surfaced on social media shows a Russian-speaking pilot appeared to have landed in the desert with a parachute before being rescued by a Libyan National Army Mi-24 Hind helicopter.

While the video showed items consistent with ejection, and the pilot mentions that he ejected from his aircraft, there were no evidence of aircraft crash or smoke is visible.

However, local observers insists that the video was actually a combat search and rescue (CSAR) exercise.

Since May, at least 14 Russian-supplied combat jets have been operating in Libya in support of Khalifa Haftar’s Libyan National Army (LNA), which has its main hub in the eastern city of Tobruk.

The LNA is trying to dislodged the U.N.-backed Government of National Accord (GNA), headquartered in Tripoli.

In June, local sources reported that at least one of the Libyan-based MiG-29s had flown a reconnaissance mission over the strategic coastal city of Sirte. The is as GNA forces attempted to regain control of the area.

Roughly similar in appearance and capabilities with the US Stinger.

The Wagner group have been deploying more personnel in the area on a regular basis. According to UN reports, about 338 Russian cargo flights arrived in Libya from Syria between November 2019 and the end of July, “Russian IL-76 aircraft travel from Syria into Libya regularly,” AFRICOM spokesman Col. Christopher Karns.