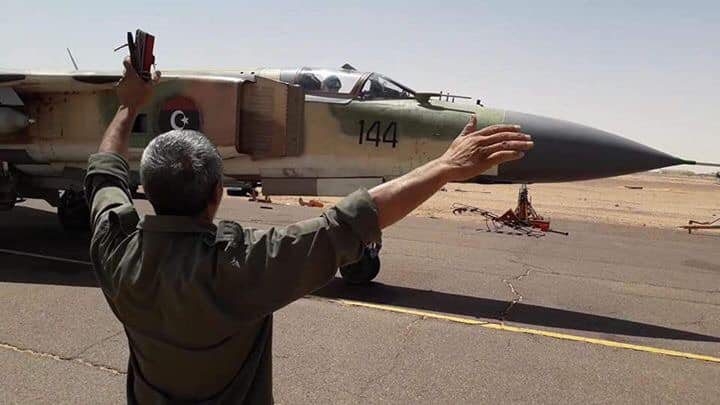 The much-loved MiG-23ML Flogger fighter/bomber aircraft belonging to forces of the Libyan strongman Khalifa Haftar has been shot down by the Government of National Accord (GNA) forces on December 7, 2019.

This particular MiG-23ML was named ‘Frankenstein Flogger‘ because it was made flyable by cannibalizing parts from other stricken aircraft.

Following the shoot-down, several conflicting reports were published regarding the scene of the crash, with some reports saying the MiG-23 crashed in western Tripoli, whereas others say it was hit and crashed near Yarmouk Camp in southern Tripoli.

So far, the LNA has acknowledged the loss, but says the MiG-23 crashed for technical reasons. However, after an Italian and U.S. military drone crashed in Libya on November 20 and 23 respectively, the LNA imposed a no-fly zone in Tripoli.

“Today we declare a no-fly zone, where flying is totally prohibited without prior coordination with the General Command of the armed forces,” LNA Spokesperson al-Masmari told a news conference, adding that Mitiga, Tripoli’s only functioning airport, was exempt for humanitarian reasons. In response to the LNA’s declaration, the GNA-affiliated interior ministry said in a statement that any action threatening civil aviation and airports “amounts to crimes punishable under national and international law”,

Similarly, on April. 14, 2019, another LNA’s MiG-21 jet was shot down during an advance on Tripoli, allegedly using Chinese-made FN-6 MANPADS, known to be in the hands of GNA armed groups.

The Mikoyan-Gurevich MiG-23ML is a third-generation jet fighter, variable-geometry fighter bomber aircraft, designed by the Mikoyan-Gurevich design bureau in the Soviet Union. It was brought back to active service at Benghazi airport, in eastern Libya, where it had been in storage for many years.

In 2015, the Libyan Air Force was believed to operate two MiG-23MLs (6472 based at Benina and 6132 based at al-Watiya) involved in the war of attrition against Libya Dawn forces. During that period, the Mig-23ML became famous for its extremely low-level pass which awed aviation enthusiast all over the world.