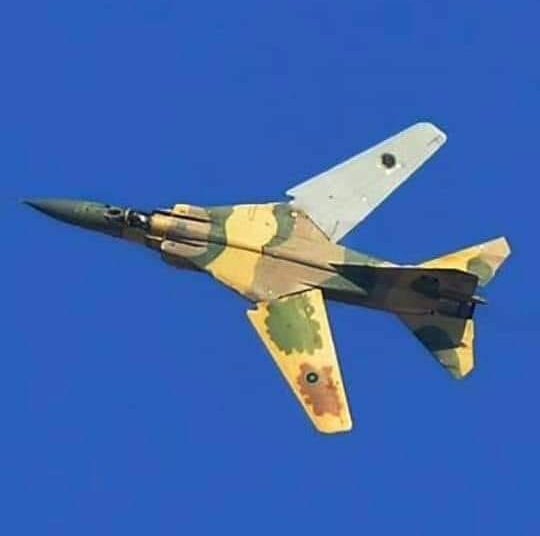 As seen on the photograph, the MiG-23 Flogger which was formerly non-operational was made flyable by cannibalizing parts from other stricken aircraft.

The MiG-23 now dubbed ‘Franken-Flogger‘ by LNA aviators was refurbished and made flyable again by attaching two sets of wings from different aircraft, on a separate centre fuselage.

Libya which is currently embroiled in a civil war since its former leader Moammed Gadaffi was killed following a NATO intervention in the country.

Since then, Libya has lost most of its aerial capabilities, as several of the country’s aircraft and helicopters were either shot down or destroyed on the ground by NATO. The survivors were also targetted by armed militias fighting in the civil war.

In 2015, the Libyan Air Force was believed to operate two MiG-23MLs (6472 based at Benina and 6132 based at al-Watiya) involved in the war of attrition against Libya Dawn forces.

During that period, one of the Mig-23ML became famous for its extremely low-level pass which awed aviation enthusiast all over the world.