In the last conflict, the Turkish military used its drones to help Tripoli push back Haftar's forces. Turkish drones particularly the Bayraktar TB2 significantly changed the course of the battle 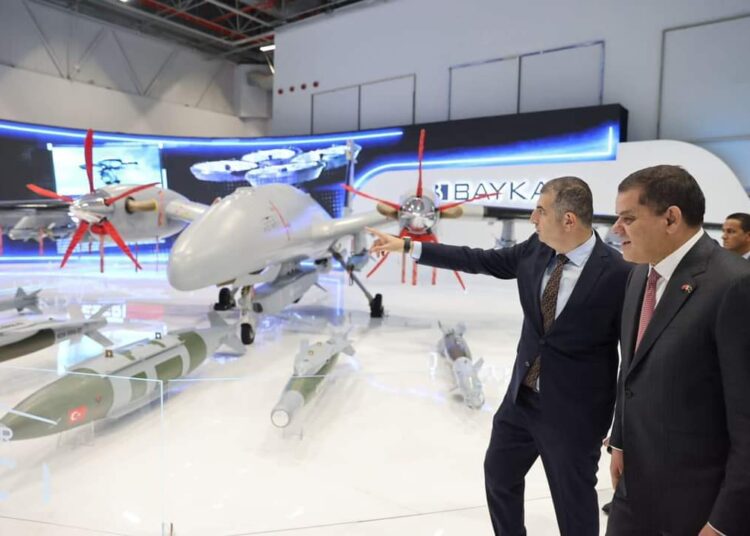 Dbeibah and Haluk Bayraktar, the manager of Baykar, pose in front of the new model of their Akinci drone.

Libyan politician and businessman Abdulhamid Dbeibah who is the prime minister of Libya under the Government of National Unity (GNU) in Tripoli on Tuesday 25, October visited Turkey where he signed a military cooperation with the Turkish Defence Minister Akar Hulusi.

Dbeibah’s Twitter post said that the deals included “implementation protocols for the security agreement” signed that year by authorities in Tripoli, both countries agreed in Istanbul to further strengthen their alliance as a follow-up to the military cooperation agreement entered in 2019. At the time, Tripoli was under an assault by forces allied with eastern-based Libyan strongman Khalifa Haftar.

In the new agreement, Turkey will assist to bolster Libya’s military and paramilitary capacity particularly in areas of military procurement, border security, organised crime, and terrorism, in addition to the creation of a military cooperation committee. Also, the agreement will see Turkey providing military aircraft and helicopter training for Libyan pilots.

It comes three weeks after Turkey’s Foreign Minister Mevlut Cavusoglu signed a deal in Tripoli allowing for oil and gas exploration in Libya’s Mediterranean waters, but sparked anger in Greece and Cyprus. The agreement was rejected by a rival administration in the war-torn country’s east, as well as neighbouring Egypt, both of which argue that Dbeibah’s term as Libyan PM has expired.

It is expected that the military alliance will lay the groundwork for the procurement of Turkish combat-proven Bayraktar TB2, the newer Akinci drone, or both.

At the SAHA EXPO Defence & Aerospace Exhibition which took place in Istanbul from Tuesday, 25. October to Friday, 28. October 2022, Dbeibah met with Haluk Bayraktar, the manager of Baykar, the company manufacturing the Bayraktar TB2 drone, and posed for pictures in front of the new model of their Akinci drone.

Local media reports that a deal for the acquisition of the Turkish-built drone will be signed between both countries in the coming weeks. This move will consolidate Dbeibah’s grip on power by protecting his administration from a fresh offensive by Haftar’s force, although, Turkish military presence is already preventing such attempts.

In the last conflict, the Turkish military used its drones to help Tripoli push back Haftar’s forces. Turkish drones particularly the Bayraktar TB2 significantly changed the course of the battle, winning them a victory over Haftar’s forces who were backed by Russia and the United Arab Emirates.

The 2019 civil war witnessed a widespread use of drones by both sides, culminating into the largest drone warfare in the region.

Besides the drones, Libya is also slated to receive 12 Hürkuş-C light trainer and combat aircraft. The deal was signed on May 19 between LAF Chief of Staff Major General Mohammed Al-Sifaw Quilt and Turkish Aerospace Industries (TAI) officials. No details were given on an expected delivery schedule.