Libya: After Russia, US now considering sending troops to region 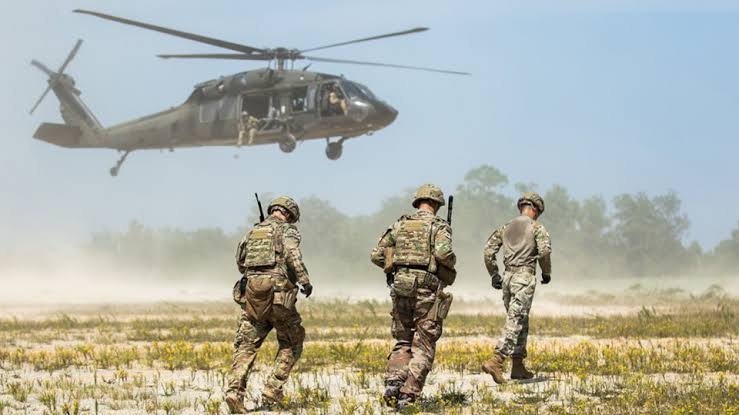 With the recent surprising Russian deployment of at least 14 advanced MiG-29 and Su-24 combat aircraft to wartorn Libya in support of Khalifa Haftar, the United States is considering doing same.

The United States Africa Command (AFRICOM), is in talks with neighboring Tunisia to bolster ties between the two nations and counter Russia’s moves in the region.

Just last week, the US accused Russia that the 14 aircraft deployed in Libya are part of “Russia’s longer term goal to establish a foothold in the region that could threaten NATO allies.”

Brig. Gen. Gregory Hadfield, deputy director for intelligence said, “If Russia secures a permanent position in Libya and, worse, deploys long-range missile systems, it will be a game-changer for Europe, NATO and many Western nations.”

The combat jets will most likely provide close air support and aerial protection for the Wagner Group, a Russia-based state-sponsored company that employs mercenaries to fight for Haftar.

Since the presence of the fighter jets was confirmed, U.S. Army General Stephen Townsend, the Commander of AFRICOM, has been in talks with Imed Hazgui, Minister of Defense of the Republic of Tunisia regarding opportunities for bilateral training and exercises to improve the security in the region.

“As Russia continues to fan the flames of the Libyan conflict, regional security in North Africa is a heightened concern,” Townsend added. “We’re looking at new ways to address mutual security concerns with Tunisia, including the use of our Security Force Assistant Brigade.

The Security Forces Assistance Brigade (SFAB) is a non-combative training unit that deploys as part of a military assistance program.

“Russia is clearly trying to tip the scales in its favor in Libya. Just like I saw them doing in Syria, they are expanding their military footprint in Africa using government-supported mercenary groups like Wagner,” said Townsend. “For too long, Russia has denied the full extent of its involvement in the ongoing Libyan conflict. Well, there is no denying it now. We watched as Russia flew fourth-generation jet fighters to Libya — every step of the way. Neither the LNA nor private military companies can arm, operate, and sustain these fighters without state support — the support they are getting from Russia.”

“We know many of our African partners are under siege from malign actors and terrorist networks,” the AFRICOM Commander said. “We also know we can’t surge trust.  Therefore, we remain committed to strengthening critical partnerships and working together to deliver solutions to common challenges.

For several years now, Tunisia has been facing the violence raging in Libya to its east; while on its western border with Algeria it faces Islamic jihadist fighters from both al-Qaeda and the Islamic State (ISIS). Since 2011, the United States has invested more than $1 billion in the Tunisian military. Both nations have previously collaborated to enhanced Tunisian border security, military intelligence, and air-ground operations.

Tunisia recognizes the benefits of American values, professionalism, and commitment. They very much value our partnership.”

In August last year, USAF aircraft carrying American military personnel came to Libya in a framework of cooperation with the UN-backed Government of National Accord Presidential Council in the field of combating the Islamic State.