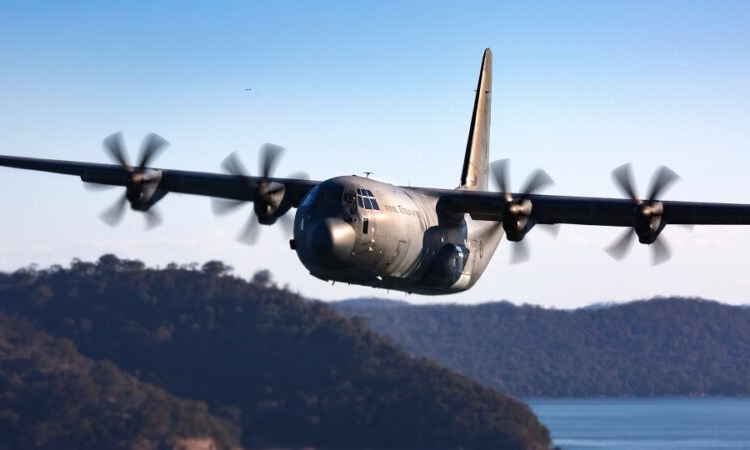 A Royal Australian Air Force C-130J Hercules transport aircraft conducts formation practice on the New South Wales coast near Sydney. *** Local Caption *** A Loadmaster is an aircrew member tasked with the safe loading, transport and unloading of cargo and passengers on board Air Mobility Group aircraft. The role also ensures the safe delivery of cargo and personnel during airdrop missions, as well as a host of other observation and aircrew awareness duties during complex Airborne Operations missions. The role was established within the Royal Australian Air Force in the late 1950s with the introduction of larger and more complex transport aircraft, and later became a formal Airman Aircrew mustering.

The United States has offered a dozen C-13OH Hercules transport aircraft to the South African Air Force (SAAF) to replace its older and accident-prone C-130BZ transporters.

A second option may see South Africa’s accept the offer, and also upgrade 5 C-30BZs operated by 28 Squadron, this would enable the C-130BZs to remain airworthy until 2040, Modise stated.

The South African air force faced with aircraft serviceability and availability issues due to constrained funding. This has been negatively affecting it’s flying hours. This was revealed during a progress report from the Department of Defence (DoD) presented at a Portfolio Committee on Defence and Military Veterans (PCDMV) meeting on 18 August, 2021.

“Constrained funding is also affecting the ability to provide enough serviceable aircraft, although serious efforts are being made to ensure availability is increased within the reduced budget,” the Committee heard, after expressing concern about the fact that the SA Air Force is not able to meet its flying hour targets.

In 2020, a South African Air Force (SAAF) C-130BZ Hercules suffered a nose wheel collapse at AFB Waterkloof. The C-130BZ Hercules (405) was preparing for another test-flight before the nose wheel unintentionally retracted when the number 2 engine was started.

Denel was readying Hercules 405 to replace Hercules 403 that ran off the runway in the Democratic Republic of Congo in January this year. The SAAF stripped out and dismantled the Hercules aircraft that veered off the runway at Goma, DRC. The salvaged usable parts was distributed around the remaining SAAF C-130BZ fleet as needed.