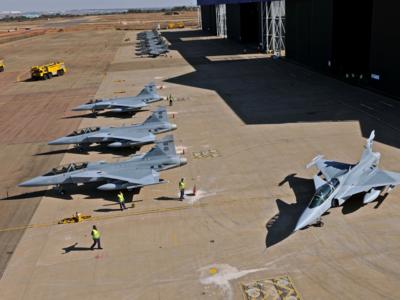 The South African Air Force (SAAF) has temporarily grounded all of it’s Gripen multirole fighter fleet as none are serviceable.

According to the Department of Defence (DoD), this is due to a lack of funding for maintenance, as support contracts were not renewed in time.

“After a lengthy discussion between the South African Air Force (SAAF), through Armscor and Saab on the contract concerning the Gripen, proposals have been presented by both parties and are being reviewed to ensure that the matter is conclusively dealt with by the parties concerned. It is unfortunate that the discussions took longer than expected as a result, negatively impacting on the Air Defence capability,” stated Siphiwe Dlamini, DoD Head of Communication.

He added that, “the SAAF is confident that a solution will be found to resolve this matter. Due to the sensitivity around the discussion, the negotiations cannot be made public.”

For year’s, the SANDF has been grappling with severe budget cuts which have been negatively impacting it’s operational efficiency. The air force has been unable to keep entire Hawk and Gripen fleets flying, and opted to place half of the Gripen fleet in ‘rotational storage’ in WaterKloof Air Force base.

According to defenceWeb, “maintenance and support contracts have not been renewed in time because of Public Finance Management Act (PFMA) requirements, Armscor implementing Preferential Procurement regulations incorrectly, and funding constraints.”

In 2017, it became known that the South African Air Force (SAAF) has no support contract with Saab to maintain its fleet of Gripen fighter jets as previous support contracts have expired.

In the DoD’s Annual Performance Plan for the year 2021-22, a total of R5.969 billion was allocated to the Air Defence programme (essentially the SAAF in its entirety), against a requirement of R7.8 billion. “The shortfall of R1 840 622 000 will adversely impact on the preparation and provision of combat-ready air defence capabilities, maintenance backlog, maintenance of capabilities and aviation safety within the Programme.”

The DoD in August told Parliament’s Portfolio Committee on Defence and Military Veterans (PCDMV) that constrained funding was affecting the ability of the SAAF to provide enough serviceable aircraft, which is negatively affecting flying hours.