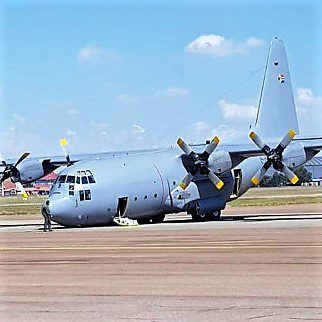 A South African Air Force (SAAF) C-130BZ Hercules has suffered a nose wheel collapse at AFB Waterkloof this morning. The C-130BZ Hercules (405) was preparing for another test-flight before the nose wheel unintentionally retracted when the number 2 engine was started.

At the moment, Military Africa learnt that Denel was readying Hercules 405 to replace Hercules 403 that ran off the runway in the Democratic Republic of Congo in January this year.

The SAAF currently has one C-130 Hercules, serial 401, in service in support of Operation NOTLELA, -the SANDF mission in support to Government to curb the spread of COVID-19.

The South African Air Force (SAAF) and the SA Navy (SAN) earlier this month deployed critical assets in enforcing the national Coronavirus (COVID-19) lock down efforts in order to contain the spread.

The deployments, under Operation NOTLELA was conducted in all nine provinces after President Cyril Ramaphosa mandated the armed forces to assist the Police Service to maintain law and order, support the state departments and also, to control the border line to combat the spread of COVID-19.

This latest incident involving a SAAF C-130 Hercules comes only a few months after a South African C-130BZ Hercules airlift aircraft crash-landed in Goma airport in the Democratic Republic of Congo. The aircraft was returning from a logistical mission in support of the South African contingent deployed to the DRC.

Canada to pull troops from Mali in July 2019