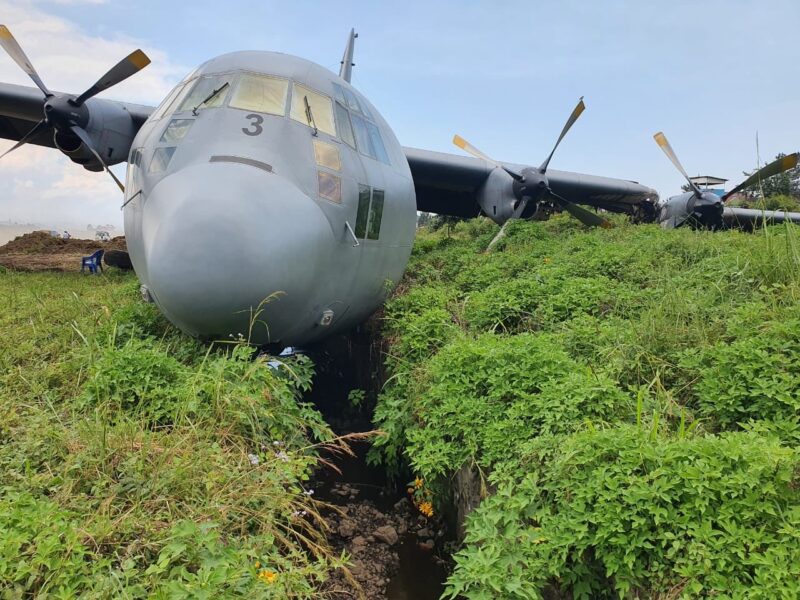 The South African Air Force (SAAF) has begun the process of stripping out and dismantling it’s C-130BZ Hercules aircraft that veered off the runway at Goma, DRC this January.

The salvaged usable parts will be tested and distributed around the remaining SAAF C-130BZ fleet as needed, says defence expert and Director at African Defence Review, Darren Olivier.

In January, SAAF’s C-130BZ overran the runway and hit a culvert a short distance from the runway edge, causing extensive damage to the aircraft’s wing and fuselage.

The aircraft was returning from a logistical mission in support of the South African contingent deployed to the DRC. The C-130BZ was transporting 67 passengers including eight crew members when it suffered a mechanical malfunction that resulted in its left wing engine catching fire upon landing.

“If Goma had larger runoff areas the aircraft could’ve been saved, but this sort of damage is uneconomical to repair. Especially on the SAAF’s budget.” explains Darren.

The salvage operation had apparently been delayed by the COVID-19 pandemic. So far, the SAAF currently have five remaining C-130BZ aircraft.

Another South African C-130 Hercules suffered a similar fate in April, when it sustained a nose wheel collapse at AFB Waterkloof.

The C-130BZ Hercules (405) was preparing for a test-flight before the nose wheel unintentionally retracted when the number 2 engine was started. It was slated to replace the now stricken aircraft in Goma.