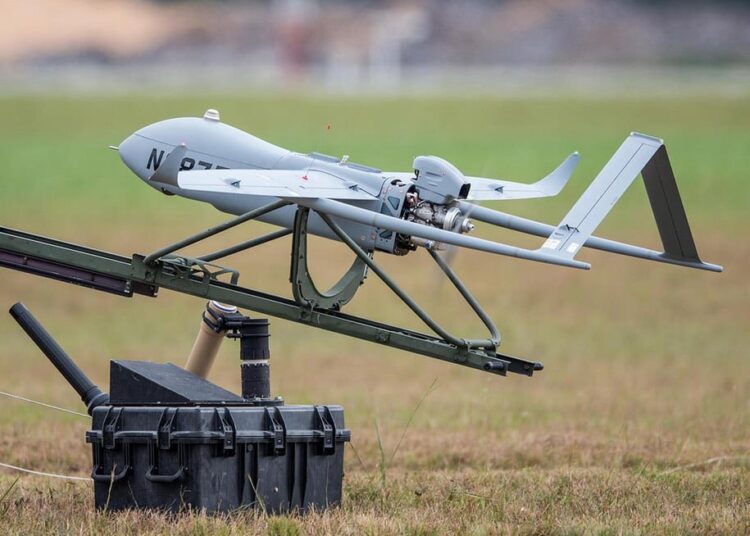 The Aerosonde 4.7 UAV is designed for expeditionary land- and sea-based operations and equipped for simultaneous day/night full-motion video, communications relay, signals intelligence, and a customer-selected payload in a single flight

AAI Corp., a subsidiary of Textron Systems, has confirmed the delivery of its Aerosonde unmanned aerial system (UAS) for the Nigerian Army.

Earlier this month, three Aerosonde 4.7 Fixed Wing UAS vehicles were delivered to Nigeria as part of a foreign military sale (FMS) contract approved by the US State Department. According to Textron Systems, the ‘first UAS capability of its kind’ in Nigeria will be deployed for intelligence, surveillance and reconnaissance (ISR) missions. The Aerosonde 4.7 UAV is also expected to meet the nation’s domestic security needs.

The contract for the three Aerosonde VTOL drones was signed on May 8, 2020, between Nigeria, the Pentagon, and Textron Systems.

Textron Systems Air Systems senior vice-president Wayne Prender said: “We are excited to see the continued expansion of Aerosonde to our partner countries. “This delivery adds to our increasing international presence and highlights the market growth for advanced uncrewed capabilities. “We know the Aerosonde system will make a difference for Nigeria as it provides the most cost-effective, real-time ISR capability in its class.”

The deal also requires the company to provide Contractor Logistics Support (CLS) services including sustainment, logistics services, parts and repairs support, technical publication updates, and asset support. The whole package is worth $25,610,000 at a firm-fixed-price, and the completion of delivery was slated for September. 30, 2021, which suffered more than one year delay.

The Aerosonde 4.7 UAV is designed for expeditionary land- and sea-based operations and equipped for simultaneous day/night full-motion video, communications relay, signals intelligence, and a customer-selected payload in a single flight, says Textron Systems.

With a payload of up to 9.1 kg, the UAS has a range of 140 km (75 nm) and an endurance of 14+ hours depending on the variant. It also features an easy-to-use launch and recovery trailer for constrained land and shipboard operations.

The new VTOL drones will join several other different types of drones in service with the Nigerian military. Abuja has taken efforts to ramp up its drone acquisitions and operations over the past few years as a result of its various counter-terror operations taking place across the country. The Aerosonde 4.7 drones will provide intelligence, surveillance, and reconnaissance capabilities to the Nigerian military.

On one hand, the Nigerian Army is gearing up to be a major operator of fixed-wing aerial assets, despite the role being primarily domiciled within the domain of the air force. The Army in the year 2020 established its own UAV Command under a new ORBAT 2016 (Order of Battle). The command will deliver responsive, persistent and precise UAV capabilities to achieve the NA’s mission. Also, the new UAV command will raise, train and sustain a UAV force which will ensure task competency to deliver precise and timely Air Imagery Intelligence.

For now, it is not yet certain if the new Nigerian Army UAV command will operate alongside the Nigerian Air Force Combat Reconnaissance Group (203 CRG) in Gombe state. The Nigerian Army has been known to operate several commercial-grade drones sourced from the civilian market.

Just last week, the Nigerian Army has been marked down to receive three MF-212 ISR and attack aircraft, as well as three Bell UH-1D transport helicopters. These acquisitions are part of the 2023 Budget proposal submitted by Nigerian President Muhammadu Buhari to the National Assembly. When approved and acquitted, the aircraft will be the Nigerian Army’s first fixed-wing aviation assets to aid its fight against Violent Extremist Organizations (VEO).

The MF 212 aircraft and Bell UH-1D helicopters may be the vanguard of a long list of aviation platforms the army will acquire which include drones and attack helicopters.