Mwari to get optionally manned kit from S-Plane

“Mwari is a game-changer for air forces,” he adds. “It is purposefully designed for the kind of asymmetrical warfare that modern military forces across the world are today being asked to conduct.” 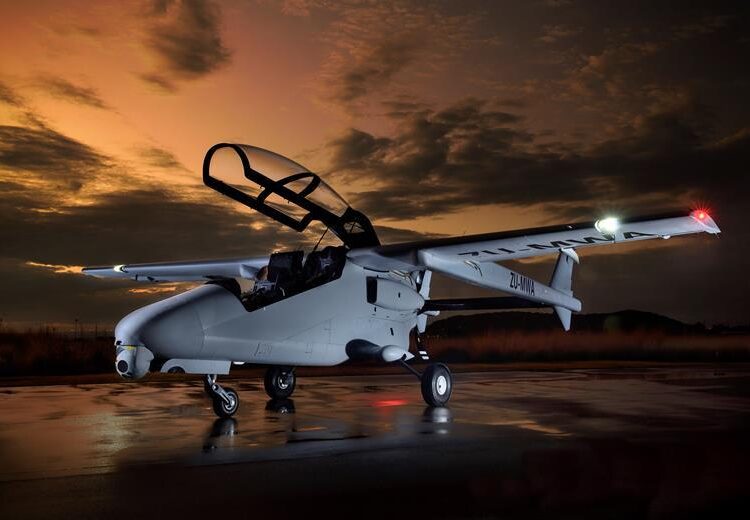 S-Plane will integrate its optionally piloted vehicle kit on Paramount’s Mwari light attack and ISR (Intelligence, Surveillance, and Reconnaissance) aircraft. Paramount Group, the maker of the Mwari entered a Memorandum of Understanding (MoU) with S-Plane during the Africa Aerospace and Defence 2022.

S-Plane’s proprietary X-KIT can turn any manned and unmanned aircraft into optionally piloted vehicles, unmanned aerial vehicles or manned airborne ISR systems. X-KIT will enable the Mwari to carry out its assigned role either as a manned or unmanned aerial platform, and the autonimous system will be integrated throughout the Mwari’s architecture, equipment, subsystems, and interfaces.

The contract with Paramount includes the integration of S-PLANE’s ParagonISR mission software into the Mwari aircraft and the conversion of the Mwari into an Optionally Piloted System (OPS) using S-PLANE’s X-KIT.

Paramount and S-Plane intends to collaborate on strategic sea and land vehicle initiatives. Thomas Jones, CEO at S-Plane, stated that, “This wide-ranging collaboration with Paramount is testimony to the exceptional and complementary products, technologies and capabilities of our companies and a shared vision of the future. We especially look forward to welcoming the Mwari to our stable of OPS (Optionally Piloted System) conversions. Enhanced automation is the inevitable next evolution for land, sea and air vehicles and allows aircraft such as the Mwari to achieve their full potential.”

According to S-Plane, ParagonISR allows for the fusing of the outputs of various sensor payloads, with offers payload stream geolocation and projection, mission sharing and sensor coverage. The ParagonISR optimises payload application and mission execution in real-time.

“The X-KIT’s ParagonISR integration within the Mwari’s existing onboard computer will also unlock maximum ISR capabilities and interfacing throughout the flight envelope and in the theatre of aerial reconnaissance, surveillance, and engagement,” Paramount said.

Steve Griessel, CEO of Paramount Group, stated that, “We are excited to celebrate South African innovation and indigenous technological prowess by way of the signing of this memorandum of understanding, alongside our partners at S-Plane. In doing so, we are not only enhancing the already incredible ISR and operational capabilities of the Mwari, but also strengthening the country’s commitment to aerospace excellence.

“Paramount and S-Plane seek to additionally collaborate in future with respect to various strategic initiatives and projects across the companies’ land, sea and air portfolios, leveraging the strengths of both organisations in their respective focus areas,” he added.

Following the completion of the Paramount Group’s new aerospace factory at the Wonderboom International Airport Complex, the firm ramped up production of its Mwari light-attack aircraft.

In July 2018, the South African defense company’s CEO disclosed that the Mwari have begun rolling off the production line, with the first launch customer to be revealed soon. “We are in an active sales campaign and we are getting excellent customer feedback. More importantly, we are starting negotiations with a number of key players around the world.”

The Mwari has secured orders for nine of the aircraft, and demand levels have enabled ‘full levels of production’ at its factory in Wonderboom near Pretoria, says Paramount during the Africa Aerospace and Defence (AAD) 2022 defence exhibition. Paramount Aerospace Industries is capable of producing three Mwaris a year, with plans to ramp up capacity to five units a year, as and when demand requires.

In September, Paramount announced the start of customer deliveries with its Mwari light aircraft, “The orders for nine new Mwaris represent an important milestone in its commercial success and have resulted in full levels of production at Paramount Group’s state-of-the-art aircraft factory” at Wonderboom near Pretoria, the company says. “Deliveries to an undisclosed customer are underway,” it adds.

“This is a proud moment for Paramount and our continent’s aerospace industry,” says Paramount Group founder Ivor Ichikowitz. “The development and deployment of Mwari underscores the strategic importance of a world-class, indigenous African aerospace industry, one that can quickly and collaboratively address the increasing security threats, conflicts and insurgencies which Africa presently faces.”

“Mwari is a game-changer for air forces,” he adds. “It is purposefully designed for the kind of asymmetrical warfare that modern military forces across the world are today being asked to conduct.”

The Mwari is known to be deployed in Cabo Delgado, Mozambique on behalf of the national government against insurgents, although, there have been no official statement from Paramount regarding the deployment of the unarmed Mwari to the Mozambican war torn region.

The Mwari multi-mission Mwari aerial platform has been equipped with advanced anti-drone technologies, enabling the deployment of the aircraft as an effective hunter and killer of Medium Altitude and Long Endurance Drones (MALEs), says Paramount Group.

The clean-sheet designed Mwari is the next evolution in ‘Find, Fix & Finish’ technologies optimized for the anti-drone defence environment, capable of engaging MALE drones at altitudes of 20,000-30,000 feet, where only highly sophisticated and costly ground-based air defence systems (GBADS) can reach, and which would otherwise require the intervention of fighter jets.