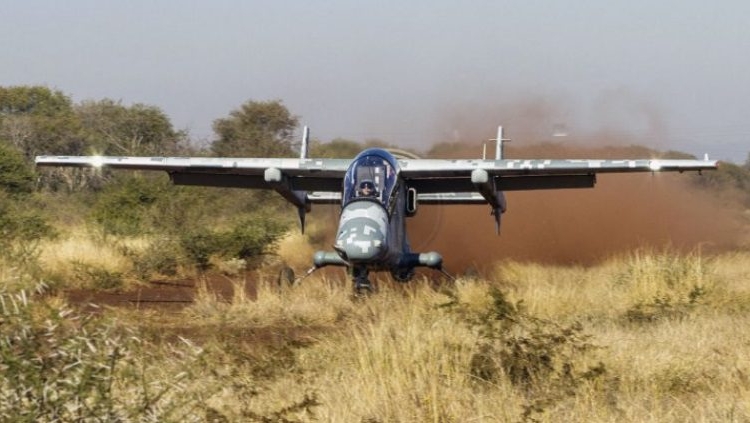 The Mwari ISR and precision ground attack/strike aircraft made by Paramount Group, South Africa has secured a customer. Paramount Group Executive Chairman Ivor Ichikowitz announced this during a press briefing at the Farnborough International Airshow on 18 July.

The South African defense company’s CEO also disclosed that the Mwari have begun rolling off the production line, with the first launch customer to be revealed soon.

“We are in an active sales campaign and we are getting excellent customer feedback. More importantly, we are starting negotiations with a number of key players around the world.”

“The system has matured dramatically and we are starting to find use cases for the aircraft that we didn’t originally anticipate.”

Paramount Group is currently offering the Mwari as the Bronco II to the United States which is searching for new planes to fulfill it’s Low Intensity Combat Warfare (LICW) role.

According to Ichikowitz, the unique capability of the Mwari is its modular mission system which allows for a rapid interchangeable components for different mission profiles. This can be done in a few minutes by technicians using basic tools.

Other similar aircraft currently being used for light attack/strike and Reconnaissance missions are re-purposed commercial and trainer aircraft, which would require significant re-engineering process. However, Ichikowitz notes that the Mwari was bourne out of a customer requirement rather than an engineering-driven process. He explains that, Most of our customers could not afford different aeroplanes for different applications.”

As a multi-mission aircraft, the Mwari can undertake a wide range of roles which includes special forces missions that require the rapid finding, fixing, and finishing of targets, as well as pipeline patrol and anti-poaching. The swappable modules allow it to have reconnaissance, intelligence gathering, close air support, training, cargo and light attack capabilities

The Mwari can be packed with a variety of sensors, with the aircraft able to support sensor systems such as the L3 Technologies MX-25. Paramount Group have reported that the Thales Avni infrared linescan unit and Hensoldt Argos II electro-optical nose turret, have also been integrated into the Mwari.

A credible alternative to Western low-cost aircraft,  it can fly for seven hours on internal fuel alone and land on austere airstrips. Despite this capabilities being suited for the African environment, the Mwari is still unable to find a customer in the continent.