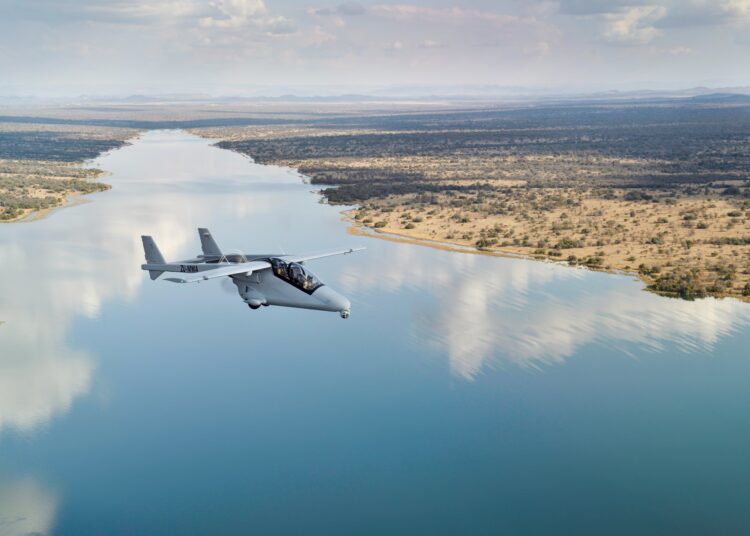 The aircraft is fitted with an interchangeable mission systems bay that provides numerous “sensor and payload options” that can be swapped out, the company said in the release.

South Africa-based Paramount Aerospace Industries has sealed deals with multiple unnamed customers for its Mwari turboprop ISR and light attack aircraft. The company is set to deliver its first Mwari multi-role aircraft to an overseas air force on September 23.

Announcing the sales at the Africa Aerospace and Defence (AAD) 2022 defence exhibition near Pretoria, the subsidiary of Paramount Group said that deliveries to one of the undisclosed customers are under way. A total of nine customisable Mwaris are on order, Paramount said. The company added that demand levels have enabled ‘full levels of production’ at its factory in Wonderboom near Pretoria.

Ivor Ichikowitz, the founder of parent company Paramount Group, said that Mwari was ‘purposefully designed for the kind of asymmetrical warfare that modern military forces across the world are today being asked to conduct. The aircraft has a critical role to play in the connected battlefield, providing forces on the ground and in the air with a force multiplier competitive advantage’.

“Mwari addresses a key global security requirement from air forces around the world, of any size, for advanced ISR and precision strike capabilities,” the company said in a news release. “It integrates design concepts from helicopters, surveillance platforms and reconnaissance aircraft with the ability to carry multiple systems, such as surveillance radar and electro optic sensor systems.”

“The development and deployment of Mwari underscores the strategic importance of a world-class, indigenous African aerospace industry, one that can quickly and collaboratively address the increasing security threats, conflicts and insurgencies which Africa presently faces.”

“[These orders] are effectively work for us for the next two years, at least,” he adds.

Currently, Paramount Aerospace Industries is capable of producing three Mwaris a year, with plans to ramp up capacity to five units a year, as and when demand requires.

He adds that the design and specification of Mwari originated from the requirement for a small multi-role surveillance and reconnaissance aircraft that is easy and quick to deploy, even from unprepared or rough-terrain runways. This is also advantageous to operate in anti-poaching, anti-people trafficking and counter insurgency applications.

The Interchangeable Mission Systems Bay aboard Mwari houses a suite of onboard situational awareness and ISR technologies such as an encrypted, high-bandwidth data link and multi-spectrum search and track sensors; long-range optical and radar surveillance systems; an SA7 CRM SATCOM link; AIS for ship identification; and real-time video.

Mwari can operate at up to 31,000ft altitude with a maximum cruise speed of 250kt and mission range of up to 550nmi when carrying ordnance, plus mission endurance of up to 6.5h.

Paramount International senior VP Eric Ichikowitz says the Mwari is purposefully designed for the kind of asymmetrical warfare that modern military forces across the world are today being asked to conduct.

“The aircraft has a critical role to play in the connected battlefield providing forces on the ground and in the air with a force multiplier competitive advantage.”

Based on both Paramount Group’s commitment to innovation and its extensive research and development and manufacturing experience, the Mwari has been designed with portable production in mind.

As such, the aircraft can, depending on customer requirements, be exported in kit format for final assembly in customer countries, and can easily integrate into supply chains around the world, enabling scalable mass production.

Sam Amsterdam, a spokesperson for Paramount Group, would not provide contract values nor identify the customers for the Mwari, but did tell the media that one is an African air force. While Ichikowitz highlighted the announcement as an accomplishment for the defense industry in Africa — and the promising future to manufacture and develop more technologies on the continent.

“Our announcement here at AAD 2022 is not only a breakthrough in the aerospace arena, it also serves as a milestone in our continent striving for greater high-skills training and technology-driven employment opportunities,” Ichikowitz said. “A strong defence industrial complex has been proven time and again to bolster sustainable economic growth.”

Although, this is not the first time Paramount Group is announcing the sale of its Mwari aircraft. In 2018, Paramount Group Executive Chairman Ivor Ichikowitz announced during a press briefing at the Farnborough International Airshow on 18 July, that it has secured a customer for the Mwari. The South African defense company’s CEO also disclosed that the Mwari have begun rolling off the production line, with the first launch customer to be revealed soon. “We are in an active sales campaign and we are getting excellent customer feedback. More importantly, we are starting negotiations with a number of key players around the world.”

In March, Mwari was equipped with advanced anti-drone technologies, enabling the deployment of the aircraft as an effective hunter and killer of Medium Altitude and Long Endurance Drones (MALEs), says Paramount Group. The clean-sheet designed Mwari is the next evolution in ‘Find, Fix & Finish’ technologies optimized for the anti-drone defence environment, capable of engaging MALE drones at altitudes of 20,000-30,000 feet, where only highly sophisticated and costly ground-based air defence systems (GBADS) can reach, and which would otherwise require the intervention of fighter jets.

Late last year, Military Africa revealed that the Mwari has been sold to the Mozambican military for use in the restive Cabo Delgado region. There have been no official statement from Paramount regarding the deployment of the unarmed Mwari to the Mozambican war torn region.