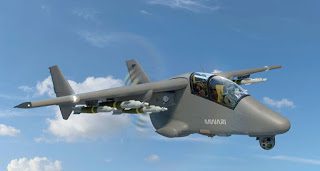 A credible alternative to Western low-cost aircraft. It can fly for seven hours on internal fuel alone

The Mwari was designed and built by Paramount company and Boeing for the world market but primarily targeted for the African Market, it was developed to merge both the good attributes and features of a low-cost plane and a helicopter.

The Mwari design features an unconventional layout so as to enable it undertake a wide variety of roles. It has a pusher-type propeller layout, great visibility and high wing for flight stability.

Mwari is a Southern African all-seeing God of creation which  is a good expression of the type of role handled by this aircraft. The Mwari was built on the very successful Advanced High Performance Reconnaissance Light Aircraft (AHRLAC) border patrol plane.

With a crew of two and requiring only 550 meters of space to take-off even if the runway is unpaved, it can carry a large payload or ordnance depending on the role it is undertaking.

Its flexibility makes for easy re-configuration on the go allowing it to quickly change into a different operational role. Its patrol radius is very large for such a small aircraft, it can fly for seven hours on internal fuel alone ideal for patrolling borders and coastline without the prohibitive flying costs.

Big powerful fighter jets are usually loved by African Generals and warlords because they signify prestige and strength however, such aircraft are expensive to fly and maintain. In Africa, large conventional military maneuvers are rare this day therefore the need for expensive single role jets have lessened as most African countries cannot keep them flying for a long time- an example is the SAAF Gripens which some have been kept in storage for a long time and has just recently been taken out for flying operations. The Mwari is an excellent platform since it does exactly what Africans type of Low-Intensity Combat Warfare (LICW) this tiny aircraft is loaded with the latest advanced sensors that can gather intelligence, intercept signals, relay signals, do day- and night precision attacks, and can even be used as an airborne Command and Control (C2) while flying from an unprepared environment with minimal operating costs.

The Mwari is a credible alternative to the Embraer A-29 Super Tucano and the L3 AT802U crop duster because unlike the two, the Mwari was designed from the ground up for COIN/LICW while being adaptable and cheaper to operate with advanced sensors, ordnance load, and flight characteristics.

Fitted with a Pratt and Whitney PT6 engines the Mwari does not need extensive ground support/infrastructure.