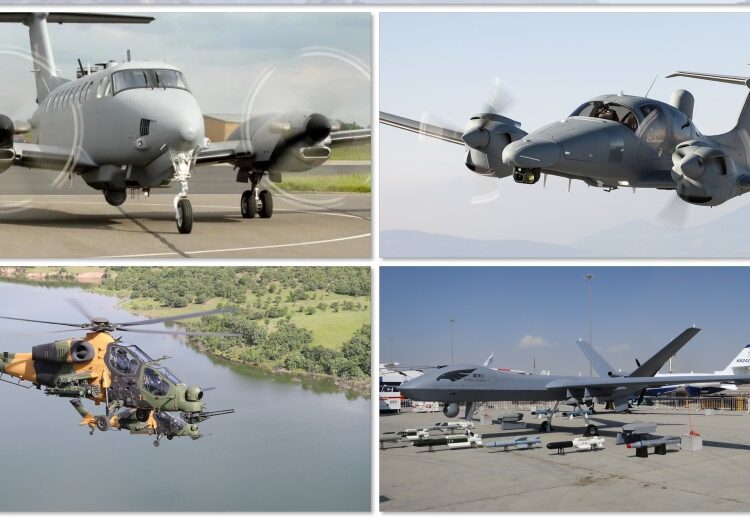 The Nigerian Air Force is set to receive 55 brand new aircraft of varying types from manufacturers across the world, as part of efforts towards strengthening Nigeria’s security posture.

Deliveries for these aircraft will begin in December 2022, and continue into the next year, which represents one of Nigeria’s largest acquisition haul in over several decades. The new aircraft will add to those already delivered since 2015.

Nigeria is currently facing several security challenges including; an insurgency in the northeast which has entered its 12th year, as well as bandits, separationists, and kidnappings.

The Chief of Air Staff, Air Marshal Isiaka Amao, on Thursday, disclosed that the Nigerian Air Force would take delivery of additional fighter helicopters in December 2022, while other new acquisitions would be delivered in 2023.

Talks between officials of the Ministry of Defence (MoD) and Italian officials have reached an advanced stage for the procurement and delivery of 24 Alenia Aermacchi M-346 Master light combat aircraft, worth an estimated €1.2 billion.

The combat aircraft are expected to replace aging Alpha jets of the Nigerian Air Force, and Leonardo would provide aircraft, training, support, and munitions for Nigeria as part of a sole-source. As a partnership, the Italian Air Force would train the Nigerian Air Force pilots at the International Flight Training School of Galatina (Lecce) and Decimomannu airbase (Sardinia) in Italy.

Spokesman of the Nigerian Air Force, Air Commodore Edward Gabkwet, said the aerial branch has sustained a 75 per cent serviceability status of the NAF air fleet, and that it has greatly improved the joint operations of the armed forces led by the Chief of Defence Staff, Gen. Lucky Irabor as well as the response time in emergency calls for air support and air interdiction in the fight against insurgency and armed banditry.

“There is great improvement in joint operations which is key to our operations. Reaction time in the case of ambush has greatly improved.
“When there is an ambush from nowhere, the jet fighters will appear. This can be seen in the number of insurgents, who have surrendered,” he said.

For combat support, the Air Force has selected Beechcraft King air 360i and Da-62 for its ISR requirements. The value of the deal for the two beechcraft is N10,860,000,000 ($24,794,520.30), which includes spares and ground support equipment, but its completion timeframe were undisclosed. Nevertheless, the Beechcraft King air 360I, Diamond Da-62 ISR, and other ISR platforms will support national forces’ missions in the West African region.

The two Beechcraft King Air 360I were acquired as attrition for two Beechcraft King Air B350 that crashed last year. One aircraft (NAF 201) crashed on Sunday 21 February, 2021 while returning to the Nnamdi Azikiwe International, Abuja from Minna Airport after reporting engine failure. A second crashed on Friday 22 May, 2021 on during an official visit to the northern state of Kaduna, killing Nigeria’s army chief, Lieutenant General Ibrahim Attahiru.

The United States government had in April this year approved the sale of Bell AH-1Z Viper attack helicopters and related equipment worth nearly $1 billion to Nigeria. The related equipment included guidance, night vision and targeting systems as well as engines and training support, the department had said in a notice to Congress.

Since July last year, US Democrats and Republicans on the Senate Foreign Relations Committee have been delaying the AH-1Z and its associated parts as well as other defense systems from being sold to Nigeria by Israel.

In line with it’s procurement policies, Nigeria seeks to diversify its weapons suppliers to prevent over-reliance on one manufacturer or country. The AH-1 Cobra attack helicopter will join others of Russian and Italian origin, namely Mil Mi-24/35 “Hind“, and Agusta A109 powers light attack helicopters.

The Viper can carry both TOW and Hellfire anti-armour missiles and is qualified to carry the Maverick missile. The helicopter can fire the Hydra family of unguided 70mm rockets or the larger 127mm Zuni rocket bombs. Since 2008, all units are armed with the advanced precision kill weapon system (APKWS), a guided version of the Hydra. It also carries a three-barrel, 20mm Gatling gun for close range (up to 2km) engagement and 750 rounds of ammunition.

For the six Turkish-built T-129 ATAK helicopters, the export success represents the culmination of almost half a decade long cooperation between Nigeria and Turkey.

A Defense Industry Cooperation between Nigeria and Turkey started in October 2021, during President Recep Tayyip Erdoğan’s visit to Nigeria.

An earlier bilateral relations between the two countries took place on Monday 30 August 2021, when the Turkish Ambassador to Nigeria, Ambassador Hidaye Bayraktar paid a courtesy call on the Chief of Army Staff, Lt Gen Faruk Yahaya, at the Army Headquarters, Abuja.

The 5-ton T-129 is a twin-engine multirole attack helicopter originally produced under license from the Italian-British company AgustaWestland and based on the A129 Mangusta. AgustaWestland is now Leonardo Helicopters.

In the area of tactical transport and logistics, Nigeria had earlier expressed interest in acquiring C295W light transports from Airbus, with a delegation visiting Nigeria that October 2016.

Therefore, in March, Chief of Air Staff (CAS), Air Marshal Oladayo Amao, announced on 23 March when he hosted the Spanish Ambassador to Nigeria, Juan Ignacio Sell, at NAF Headquarters in Abuja, that the NAF is looking to partner with the Spanish Government in the areas of aircraft acquisition, training, air operations, intelligence sharing and capacity development in imagery analysis, and is in discussions with Airbus.