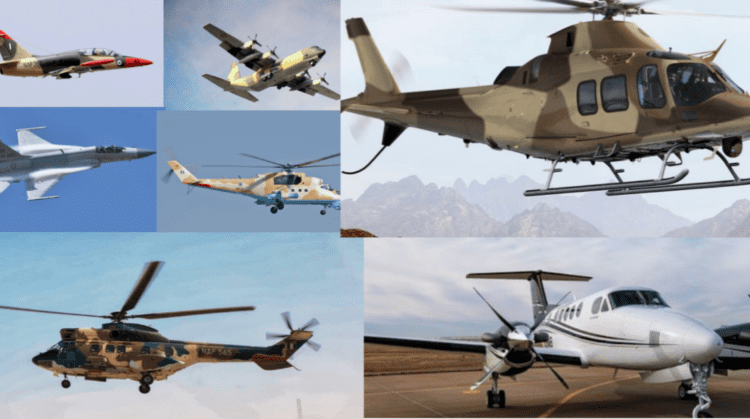 The Nigerian Air Force (NAF) intends to acquire a couple of additional hardware including surveillance aircraft and helicopters in the proposed 2022 budget.

Nigerian President Muhammadu Buhari, on Thursday, Oct. 7, presented a N16.39 trillion Naira national budget for 2022 during a joint session of the National Assembly.

In budget proposal for 2022, Defence and Security were allocated N2.41Trillion (15% of the total), making it one of the biggest beneficiary. The military allocation comprises of several projects like purchase of vehicles and defence equipment, procurement of military equipment, kits, arms and ammunition, as well as infrastructure upgrades.

Items listed for the NAF includes ongoing and new projects; with the former comprising of; the balance payment for periodic depot maintenance of three L-39ZA and one C-130 aircraft.

The Air Force also listed the balance payment for the procurement of 3 JF-17 Thunders and targeting pods, as well as 2 AW109 Trekker helicopters to replace the existing acquisition of an AW139 helicopter.

Three JF-17 Thunders have already been delivered and inducted into service since May this year, with serial NAF 720, 721 and 722.

Likewise, in 2018, the Nigerian Air Force placed an order for six Leonardo AW109 helicopters, referred to as the AW109 Powers -the AW109M is the militarized version of the AW109E that can be armed with heavy machine gun pods and 70 mm rocket launchers.

An additional two AW109 helicopter was procured last year, but several of the type has been lost to crashes; one in July 2017 in Borno state, one on November 2019 in Enugu, and another one in June 2019 in Kastina.

Other items listed under a new project are the acquisition of an ISR-capable Beechcraft King Air 360 aircraft along with it’s associated spares and ground support equipment. These two are likely to be attrition replacement for the two other Beechcraft KingAir B350i aircraft lost earlier in the year in February and May.

Nigeria’s army chief, Lieutenant General Ibrahim Attahiru and 10 others died in the Beechcraft King Air B350 crash in May during an official visit to the northern state of Kaduna.

The New Beechcraft King Air 360 ISR will likely be more capable than the two Beechcraft 350i ISR lost, with a 360-degree radar surveillance capability and an integrated sensor suite that includes a surveillance turret with long-range cameras and infrared to detect, track, classify and identify surface contacts.

Other new projects include the part payment for the Periodic Depot Maintenance (PDM) and reactivation of two AS332 BI Super Puma, as well as the upgrade of three Mi-series helicopters.

The AS332 BI Super Puma helicopters are being used for tactical transport and for limited ground attack role where they have been retrofitted with a pair of indigenous JC-6 rockets.