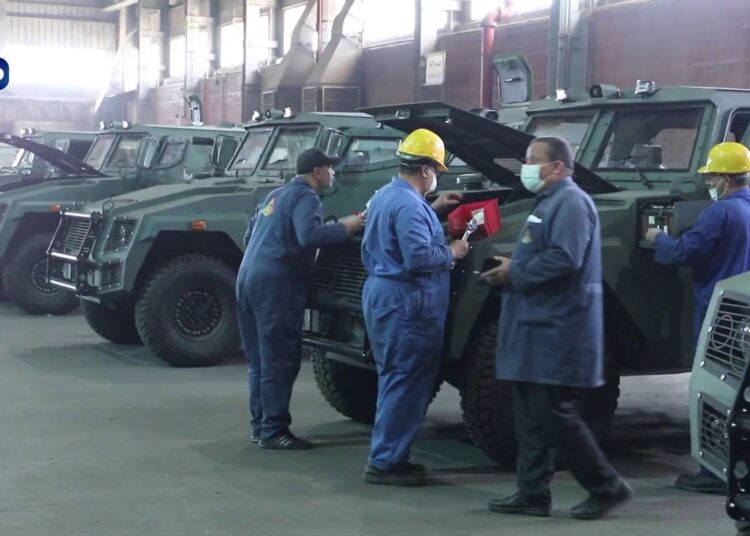 A line-up of Temsah-3 armoured vehicles in Kader's Factory No.200 in Egypt. (Credit on image)

Temsah-3 is developed by the Kader Factory for Developed Industries, which is part of the Egyptian Ministry of Defence Industrial Engineering Complex.

In July last year, President Abdel Fattah al-Sisi inaugurated the Military-Industries Factory (No. 200 and 300) and production lines for the manufacture of armoured vehicles, firearms, ammunition, and shells.

The indigenous Egyptian Temsah-3 light wheeled armored vehicle was unveiled for the first time at the EDEX 2018. The 4×4 armored vehicle is built on HMMWV chassis powered by a 205hp 6.5L GM V8 turbo diesel engine, with a range exceeds 400km, it can host a two-man crew and four dismounts.

The Egyptian Ministry of Military Production had earlier signed an agreement with the United States AM Group to produce the HMMWV Chassis locally under broader initiative to boost the Cairo’s capacity to build major components for it’s indigenous armored vehicles.

The Temsah family of vehicles were showcased during EDEX 2021, the Egypt defense exhibition that was held in Cairo from 29 November to 2 December 2021.

At the exhibition, Spain’s company Escribano Mechanical and Engineering (EM&E) signed an agreement to provide remotely operated weapon stations (ROWS) for the Egyptian army for use on it’s fleet of indigenous built armoured vehicles.

EM&E has integrated its Guardian ROWS with Egypt’s Temsah family of armoured vehicles, as well as the Sinai 200, which she said has now entered production.

The Temsah is designed primarily to be used by the military for convoy protection, border patrol, counter-insurgency, troop transportation, medical evacuation, and command control vehicle.