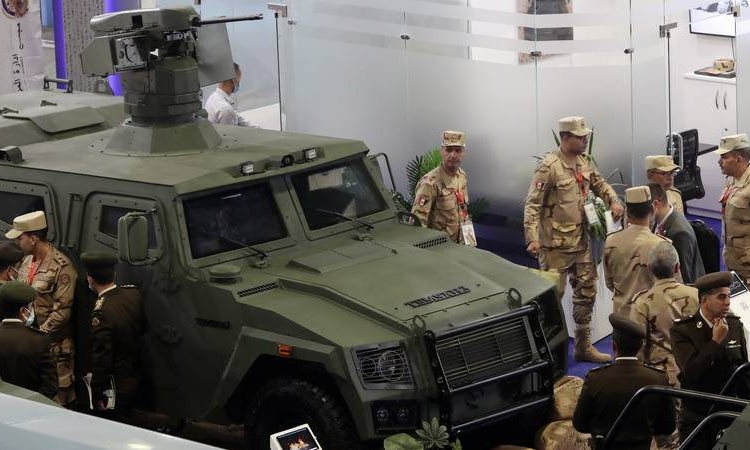 KADER factory for developed industries, a member of the Arab Organization for Industrialization (AOI), showcased the indigenous Temsah 3, 4 and 5 armored vehicle series during EDEX 2021, the Egypt defense exhibition that was held in Cairo from 29 November to 2 December 2021.

Temsah translates as “crocodile” in Arabic, is a 4×4 Mine-Resistant Ambush-Protected (MRAP) vehicle with a GVW (gross vehicle weight) of 13.3 tonnes including a 2,200kg payload.

Designed produced by the Kader Factory for Developed Industries in Cairo, part of the Egyptian Ministry of Defence Industrial Engineering Complex, it can transport six dismounts in addition to a crew of two.

Powered by a 230hp turbo-diesel engine, the vehicle is said to have a top speed of 80km/hr (50mph) when fully loaded and a range of 600km (375 miles). A remote weapons system (RWS) was fitted on the roof of the vehicle displayed at the EDEX.

The Temsah 3 Protected Patrol Vehicle (PPV) is noticeably smaller than the rest of the family, it was unveiled at the EDEX 18. TEMSAH 3 is powered by a 6.5 litre, 205hp turbo-diesel engine providing a road speed of 110km/hr (69mph) and cruising range of 440km (275 miles).

The Temsah is designed primarily to be used by the military for convoy protection, border patrol, counterinsurgency, troop transportation, medical evacuation, and command control vehicle.

EM&E has integrated its Guardian ROWS with Egypt’s Temsah family of armoured vehicles, as well as the Sinai 200, which she said has now entered production.

In continuation of its drive to develop a national defence industrial capability, a new variant of the Temsah armoured vehicles series, the Temsah 5 was also debuted earlier this year.

The Temsah 5 armoured vehicle is similar in design and role to the Temsah-1 and Temsah-4. It’s hull is protected against 7.62 mm armor piercing rounds. It can transport five soldiers including a crew of two. Its turret can mount various types of weapons including a 12.7 mm machine gun.

A lightweight Guardian ASPIS with a 7.62 mm machine gun was fitted to the new Temsah 5.