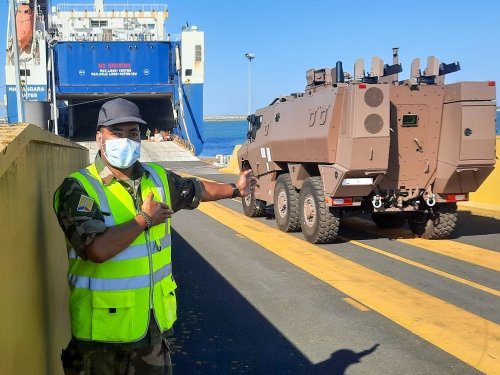 At least 32 Griffon armored vehicle of the French Army have been deployed to the Sahel to wage war against the Islamist insurgents operating in the area.

The Griffon armored vehicles were loaded aboard a Nantes Maritime Romeo vessel, the “MN Tangara” which is operated under a time charter contract with the French Ministry of the Armed Forces.

For the war in the Sahel, the vehicles will be attached to the French Army 3rd Marine Infantry Regiment (3e Régiment d’Infanterie de Marine, 3e RIMa).

Late last year, two Griffon vehicles carried out operational testing in Djibouti, in the Horn of Africa ahead of planned deployment with the ongoing French-led Operation Barkhane counter-terror intervention. They operated under the French Army’s 5th Overseas Interarms Regiment.

French troops practiced embarkation and disembarkation, then the Griffon fired at targets with its 12.7mm machine gun.

War-weary France is withdrawing troops across Africa, as joint European task Force deploys. For several years, the French military and it’s Western and local allies have been battling Islamic extremists in the Sahel region.

Operation Barkhane is being replaced by ” an international alliance, with all our partners, strictly limited to the fight against terrorism,” President Emmanuel Macron in mid-June.

French forces will now work with other European countries in the Takuba Task Force and the Malian and Nigerian armies. The troops drawdown will help France focus on its Special Operations Task Force “Takuba” commitments.

Takuba will train, advise, assist, and accompany host nation troops from the G5 Sahel. Besides France, it will consist of troops from Belgium, the Czech Republic, Denmark, Estonia, Germany, the Netherlands, Norway, Portugal, Sweden, and the United Kingdom.

In July, Operation Task Force Takuba reached its Initial Operating capability (IOC) well ahead of its planned full operational capability in 2021. Although, several of its component Forces are already on ground.