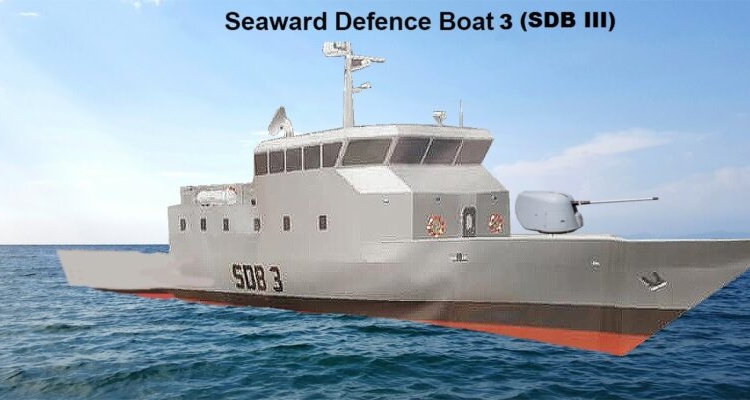 In what is now considered a remarkable feat, the SDB team earlier this month maneuvered the two halves together, -the superstructure and the hull together to form a complete hull. This move marks the largest industrial ship maneuver at the Naval Dockyard Limited in Victoria Island, Lagos.

The Nigerian government is forging ahead with this landmark naval shipbuilding program to not only deliver the important capabilities needed for the Nigerian Navy but provide a significant positive impact to the economy and continue to deliver jobs.

The SDB 3 is expected to be delivered by November this year according to a top-level official from Dorman Long Engineering. “It is a source of great pride to see home-grown shipbuilding companies in Nigeria wok together to deliver this new class of patrol ships to the Nigerian Navy in due time,” the source said.

The growing threat of maritime crimes and vices across the globe calls for the need to enhance the naval policing ability of the various maritime law enforcement bodies all over the world, particularly in the Gulf of Guinea.

In 2013, the Nigerian Navy began a very ambitious plan to build instead of buy from a foreign supplier an endeavor most likely to benefit the navy and the country in general since it would ultimately be more cost-effective. An added bonus would be the development of the nation’s civil shipbuilding industry.

The vessel is expected to be 43 meters long, able to be fitted with advanced navigation, communication, and war-fighting equipment. A 30mm remotely operated gun, two 12.4mm multi-purpose heavy machine guns, and a 40mm grenade launcher and an RHIB will be mounted on the SDB 3.

The SDB 3 follows a line of indigenous littoral vessels with the first of the SDB class, NNS Andoni, which was delivered on 7 June 2012 and is currently conducting border protection and maritime patrol missions alongside other Nigerian Navy sea-going vessels in the Gulf Of Guinea.

SDB 1, NNS Andoni (P-100) the first Nigerian-built warship, was named after the Andoni people of south-eastern Nigeria, the vessel was conceived as a research and development project by Vice Admiral GTA Adekeye and Rear Admiral GJ Jonah, who were at the time Chief of Naval Staff and Chief of Naval Engineering respectively.

Its armament includes a manned 30mm main gun, two 12.7mm, and two 40mm AGL. It also has an RHIB embarked.

The second litoral vessel, SDB 2, the NNS Karaduwa (P-102) is a 40 meters naval vessel capable of operating from the littoral coastal waters down towards the deeper seas.

Dorman Long Engineering was contracted to fabricate the hull and superstructure while the instruments and sensors was done by Blueflag Inc. It is about 40m long and can do 39 knots (45 mph; 72 km/h) with ease, a necessity when chasing marauding sea criminals.

It is currently deployed in the volatile Niger-Delta region enforcing the federal government maritime security mandate and showing the flag.

Commenting on the strides of the NN in ship building, Superintendent, Naval Dockyard Limited (NDL) Commodore Levi Kohath, said the service has made commendable progress, noting that the country’s plan with the acquisition of the Naval Shipyard in Port Harcourt and Naval Dockyard in Lagos was for the development of indigenous capacity in ships maintenance.

The government could award a contract for the Nigerian Navy to build 10 SDBs. “This will enable procurement of necessary equipment for large scale construction and further enhance the capabilities of the Naval Dockyard Limited. Research and development would also need to be well funded in support of shipbuilding. It is pertinent to point out that shipbuilding if well-coordinated would impact on other areas of technological advancement and promote national development as a whole.”