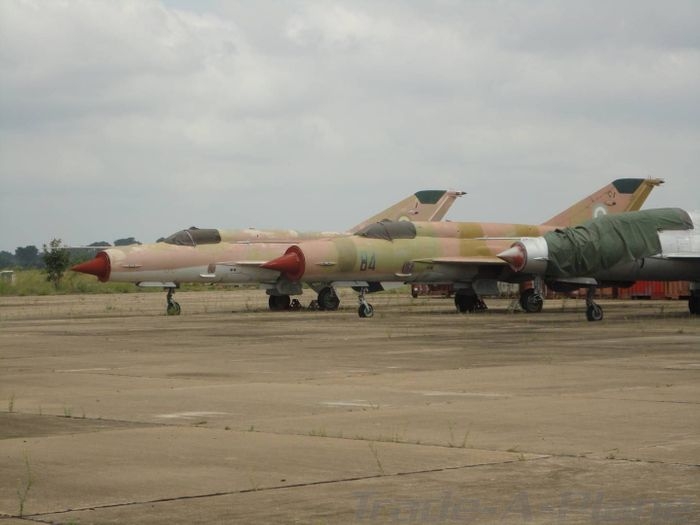 For many, the iconic MiG-21 Fishbed is an awe-inspiring fighting machine, and for Nigeria, a reminder of long past great airpower. However, many have been retired for several decades.

Nigeria has placed all its remaining twenty Soviet-made MiG-21 Fishbed jet fighters for sale online. Twenty MiG-21s are being offered for sale by Nevada-based Inter Avia Group, no prices are placed yet by the vendor says Thomas Newdick at TheDrive.

At this time, the airworthiness status of the aircraft was not indicated, although, Nigeria’s MiG-21 fleet have seen very little use but they have been grounded for a long time.
The sale includes; Five MiG-21 MF (Single Seat), four MiG-21 UM (Dual Seat), eleven MiG-21 BIS (Single Seat), and 15 new engines and spares inventory.

Twenty-five Mikoyan-Gurevich MiG-21 MFs and six MiG-21UM were delivered in 1975 to replace its aging MiG-17 Fresco fighter jets. By 1984, only 12 MiG-21MFs and five MiG-21UMs were operational due to the heavy toll caused by economic crisis.

To replace the losses,13 of the more advanced MiG-21bis, plus two more MiG-21UM jets, however, all were put into storage in the 1990s due to lack of spares and finance, at least one single-seat aircraft is now serving as the gate.

The first operational mission of Nigeria’s MiG-21s was in the early 1980s, whereby they flew from their homemade in Maiduguri to Chadian territory for surveillance and reconnaissance in support of the Organization of African Unity (OAU) peacekeeping mission in neighboring Chad.

Also, eight years later, the MiG-21s reportedly attacked several lakeside villages in the Lake Chad region, leaving as many as 90 dead and many more wounded during a dispute with Chad over fishing rights in April 1983.

To bring them flying again, a Russian-Israeli consortium offered to fix all 23 remaining MiG-21, but Nigeria instead opted for a Romanian company Aerostar and Israel’s Elbit upgrade which was similar to the LanceR upgrade for the Romanian Air Force MiG-21 fleet. Unfortunately, the deal fell through due to lack of funds.

In Nigeria, the F-7s operational service record is mixed, with more than six aircraft lost to crashes. Today, the remaining aircraft are currently undergoing Life Extension Program to keep them flying.

Besides the MiG sale, Inter Avia Group is also offering three former Nigerian Air Force C-130H Hercules transport aircraft for sale.
According to the sales listing, the C-130H “have been stored for many years and have many parts removed.”

They are being offered for $2.5 million, however, their transfer would require approval under the International Traffic in Arms Regulations (ITAR), the U.S. guidelines controlling the manufacture, sale, and distribution of defense equipment and services. Aircraft have been stored for many years and have many parts removed.

Nigeria bought six Lockheed C-130 Hercules from the United States the 1970s, ceveral of the C-130s were grounded for decades due to negligence and economic crisis.

On 26 September 1992, a NAF C-130H Hercules serial number 911 crashed in Lagos, when three engines failed, possibly due to high take-off weight. All 158 people on board were killed, including 8 foreign nationals.

In September 2009 U.S. Air Forces Africa and 118th Airlift Wing personnel a C-130 (NAF 917) flyable again, and it was subsequently sent to Germany for further repairs.
In November 2011, Nigeria tried to sell three U.S. -purchased C-130s to Senegal, but the United States government vetoed the deal, stating that “Nigeria might be in violation of end-use agreements with the USG, subsequent follow up leads post to believe that the lack of proper paperwork is a result of the inappropriate handling of the case by a few Ministry of Defense (MOD) individuals, possibly hoping to profit from a quick sale.”

The Hawker 4000 jet was manufactured by Hawker Beechcraft, acquired in December 2011, and it was sold for $22.91 million at that time.

The aircraft has the capacity to carry nine passengers and three crew, for a distance of 3,190 nautical mile, however, it has flown for a total of 1,768 hours.

Interested buyers are advised to inspect it at the Presidential Air Fleet’ s hangar located at the Nnamdi Azikiwe International Airport, Abuja.