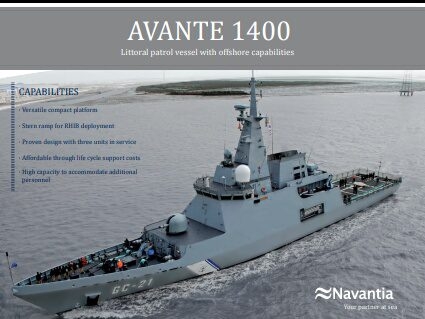 The deal for the two Avante class vessels which was first reported in December last year, is currently awaiting approval of Morocco’s King Mohammed VI.

The two vessels would cost around 260 million euros, including a maintenance agreement.

The Avante vessels for Morocco would be similar to those built for Venezuela, at around 80 metres in length with a displacement of 1 500 tons. They have a crew of around 35 and space for about 30 extra people plus a helicopter.

Navantia developed a family of ships with different sizes from 300 t. to 3,000 t., and adapted to different missions, sharing design standard.