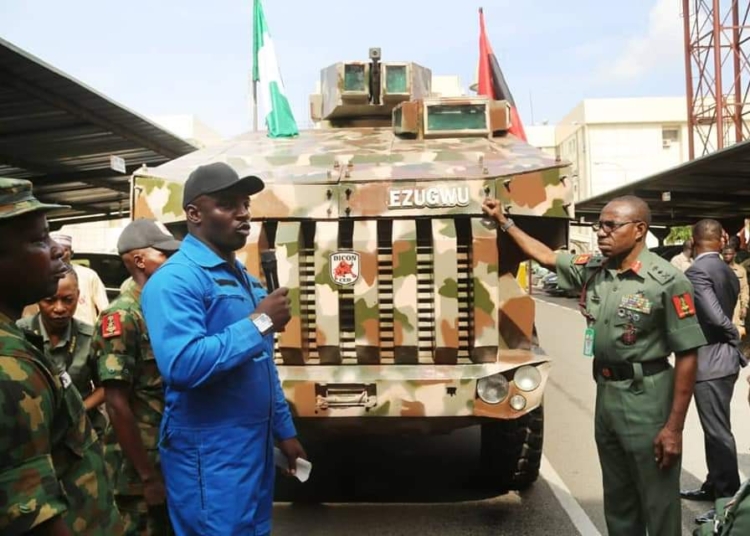 The agreement was signed by the Chief of Army Staff, Lt Gen Tukur Yusufu Buratai, represented by the Chief of Policy and Plans, ‘Army’ Lt Gen Lamidi Adeosun and the Director General of DICON, Maj Gen Victor Ezugwu at the Army Headquarters Abuja.

The Chief of Army Staff, Lt Gen Tukur Buratai disclosed during the signing that this procurement was done in order to reduce reliance on foreign made vehicles and other million equipment.

“We are gathered here today to actualise one of the lofty dreams of the army in reducing challenges of having to rely on everything from outside Nigeria in terms of lethal equipment for Nigerian Army.”

According to Lt Gen Buratai, the first set of Ezugwu MRAP will be ready by December and will be immediately deployed to the embattled northeastern region.

‘We have passed the phase of research and development, we are in full production,” he said.

It can resist Improvised explosive and mine blast up to 12 kg under the vehicle.

The Ezugwu MRAP features a double enclosed turret which can traverse 360 degrees. Both turrets can mount various types of heavy weapons including a 12.7 mm machine gun.

The lack of a credible Nigerian made weapons production capacity has severely limits the Nigerian military’s campaign against the Jihadi group Boko Haram.

However, on account of the counter-terrorism operations, newer and modern weapons are being brought into service faster than before.