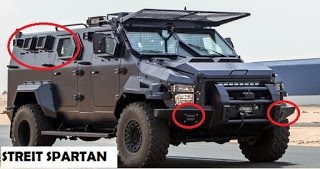 The Nigerian Military just took delivery of the first batch of assorted armored vehicles. The new delivery was reported on Twitter by the current Managing Director of the Nigerian Port Authority Mrs Hadiza Bala Usman. According to Mrs Bala she tweeted that the armored vehicles were part of a large order of about one hundred and seventy seven (177) vehicles with different configurations which 40 has been delivered while the rest will arrive from Jordan before December. She also said on Twitter that the armored vehicles were Mine protected which indicate that some Mine Resistant and Ambush Protected (MRAP) were among the mix delivered. Although no information concerning the purchase was ever released by the Nigerian Government or the Military but this is not surprising since the Nigerian Government or the military rarely provide information on its acquisition plans. The purchase of the 177 armored vehicles is considered a welcome development because the Nigerian Armed Forces is currently battling the deadly Islamic sect Boko Haram in a bloody war that has dragged on for six years now. The Military is also actively engaged in the Southernmost part of the country where the Niger Delta militants are active. Having sufficient armored vehicles especially Mine Resistant and Ambush Protection (MRAP) to convey troops in an hostile environment is an essential requirement in today’s battlefield largely due to the ever present threat of Improvised Explosive Devices (IED) used by terrorist. An MRAP is designed in such a way to protect the soldiers inside in case it gets hit by IED at the expense of the vehicle. The Nigerian Military still make use of soft-skinned utility vehicle such as the Toyota Hilux to move troops round the country, the use of soft-skinned vehicle has been criticized in many sectors because it offers minimal protection against event the smallest arms used by militants and terrorist thereby putting the soldiers in harms way. The more MRAP and armored vehicle the Nigerian Army receives the more its troops are protected which is seen as a win by many. The delivery was witnessed by the Minister of Defense Mansur Dan Ali the Chief of Defence Staff General Abayomi Gabriel Olonisakin and other dignitaries. The Armoured vehicles which were manufactured in 2016 in the United Arab Emirate (UAE) appears to be three type of Streit Group APC. The smaller one being the Streit Spartan 4X4 while the larger one appears to be the Streit Typhoon 4X4. A Streit Warrior 4X4 can also be seen at the back. Nigerian military already operate Streit Group Spartan Mk.II & III and Warrior APCs serving the Nigerian Police Force and Army and has been deployed for combat operations therefore it makes more sense to go for more units. Furthermore, Streit Group has a service centre for maintenance, servicing and overhaul of all Streit range of APC and MRAPS in Nigeria. This new acquisition will bring the total number of different Streit APCs in Nigeria to four which are Streit Typhoon 4X4, Streit Spartan 4X4, Streit Cougar 4X4, Streit Warrior 4X4
The Nigerian Army Streit Spartan is armed with dual Browning M2 12.7mm Heavy Machine Gun.
SPECIFICATIONS
(According to the Manufacturer)
Notable features has be marked for easy identification.
STREIT TYPHOON
Typhoon 4×4 is a Mine Resistant Ambush Protected Vehicle (MRAP) which is mostly used as troops transport and fire support vehicles for ground troops. It can also be configured as a field ambulance, command and control (C2) vehicle and for scout operations.
STREIT SPARTAN
Spartan 4×4 is an Armored Personnel Carrier can be deployed for various missions such as Troops transport, Ambulance, peace keeping operations and convoy escort.
STREIT WARRIOR