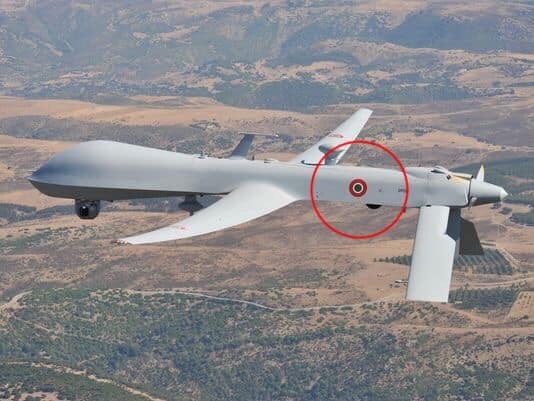 This article has been updated to indicate that the Italian MQ-9A Predator UAV crashed and was not shot down.

An MQ-9A Predator B unmanned aerial vehicle (UAV) allegedly belonging to the Italian Air Force has crashed on November 20 over the town of Tarhunah in western Libya.

Photographs released on social media by Libyan sources shows the wreckage of the UAV. The roundel of the Italian Air Force can be clearly seen on the downed UAV’s wings.

Following the crash of the UAV, the Italian Defense Ministry through its Twitter handle confirmed the loss of the Predator UAV.

The Twitter post stated that the drone was flying in support of “Operazione Mare Sicuro” (maritime surveillance of the waters off Libya). And that thr Libyan authorities were informed of its presence. Cause of the loss being investigated.

Regarding the MQ-9 Predator B, the drone was designed by General Atomics in 2007 for the United States military.

As a Medium Altitude Long Endurance (MALE) RPV, the MQ-9A has a range of more than 1,800km and an endurance of up to 14 hours.

In 2008, the Italian Military procured six armed MQ-9A UAVs from the United States. It was operated by the 32° Stormo Wing of the Italian Air Force, which is based at Amendola Air Base in southeastern Italy.

The UAVs took part in the 2011 NATO-led intervention in Libya. supporting Operation Unified Protector, Mare Nostrum operation in the Mediterranean Sea from Djibouti, and have monitored the Somalian seas as part of its anti-piracy missions.

For months now, the Libyan war has entered a new dimension, unmanned aerial vehicles (drones) are increasingly being used by both sides.

For instance, within that period, two Aeronautics Orbiter-3 Small Tactical UAS was shot down by LNA forces. While in April, a Russian made Orlan-10 UAV shot down in Libya.

Even Iranian-made drones like the Ghod Mohajer are also being used.

To date, drones have become commonplace in modern warfare, with more than a dozen countries employing. Proliferation of armed drones throughout the world is a growing concern.