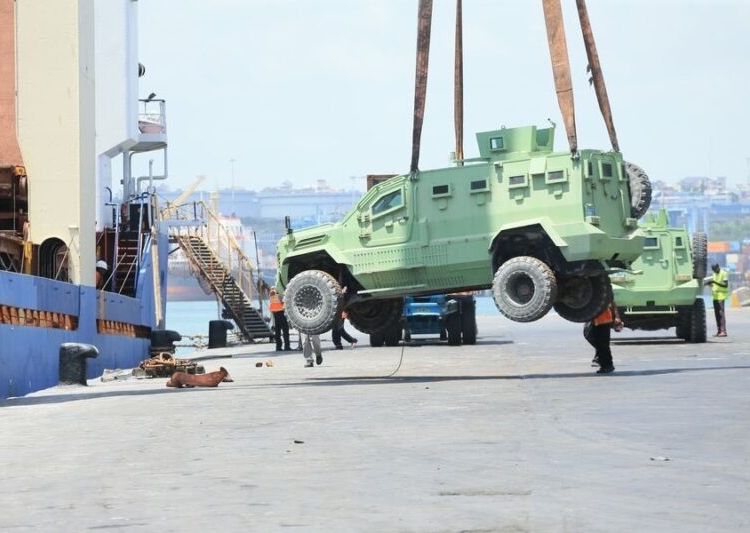 A consignment of IAG Guardian Extreme 4×4 being delivered to an East African country via the Kenyan port of Mombasa.

Several of the International Armoured Groups (IAG) Guardian Stream vehicles were being offloaded from a vessel, to be transferred to an unknown destination.

The Mombasa port in Kenya serves a number of landlocked eastern African countries including Uganda, Burundi, Rwanda, South Sudan and the Democratic Republic of Congo.

It is not yet clear who owns the armoured vehicles.

The IAG Guardian Xtream is a United Arab Emirates-made armored vehicle. It was developed by the International Armored Group company.

The 4×4 vehicle offers protection level of STANAG Level III, and are able to withstand projectile fired from high level ballistic and blast resistance.

Elsewhile, Cameroonian military forces are operating the IAG Rila mine resistant ambush protected vehicles against non-state actors within its borders.

At least 20 of the Rila MRAPs were to have been acquired from IAG. Rila 4×4 mine-resistant ambush-protected seats 12 fully equipped infantrymen on military-grade certified blast attenuation seats, in a 4×4 configuration.

IAG announced that it had received an order from an undisclosed customer for the supply of Rila MRAP vehicles in the second half of 2017. Cameroon may be the likely customer.