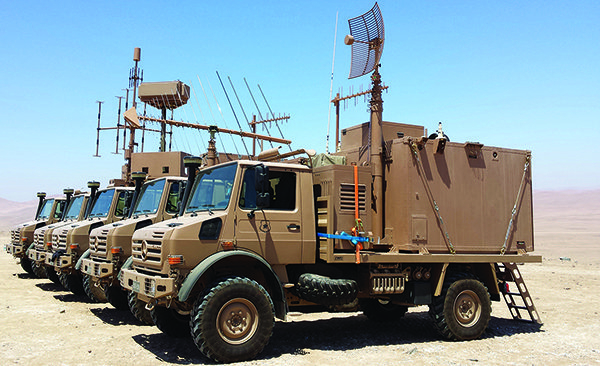 Israeli Elbit Systems was awarded an approximately $70 million contract in June to supply “Alinet” Electronic Warfare (EW) AND Signal Intelligence (SIGINT) solutions to Morocco in a contract that will be executed over a period of two and a half years.

Under the contract, Elbit Systems will provide ground-based EW and Signal Intelligence (SIGINT) units equipped with Electronic Support Measures, Electronic Counter Measures as well as Command and Control systems. These units will generate a comprehensive passive air and ground picture and provide an electronic order of battle, enabling effective responses to both aerial and land-based threats.

“As part of the contract, Elbit Systems will supply ground EW and SIGINT units equipped with electronic support means, electronic countermeasures as well as command and control systems. These units will create a comprehensive passive air and ground picture and provide an electronic order of battle, which enables an effective response to both air and ground threats,” the statement said.

Oren Sabag, General Manager of Elbit Systems ISTAR & EW, said: “We witness a  growing demand for our EW and SIGINT solutions as militaries across the globe increasingly recognize the critical importance of dominating the electromagnetic spectrum.”

Alinet systems are considered classified intelligence systems since they enable the collection of signals intelligence and electromagnetic information (radar) The field of spectrum collection is considered a strategic capability. The system is designed to collect radar signals and perform RRR tasks to determine the frequencies emitted by radars of air defence systems, and can also collect radio and electromagnetic radar signals.”

Alinet is used to suppress the enemy’s air defences by searching for radar signals and radio signals which can pinpoint locations such as command posts, and this information can be combined with Bayraktar TB2 and HAROP drones without the need for direct monitoring from drone-mounted Electro-Optical systems.

Israel and Morocco continue to increase their defence cooperation after they signed a defence pact in November last year. Morocco had previously signed a memorandum on cyber cooperation and data security – the latter a possible preamble to purchases of high-end Israeli military technologies.

Although unspoken, Rabat’s acquisition of the Israeli Alinet EW and SIGINT system is in direct response to its rival Algeria’s procurement of the Chinese CEW-03A Mobile 6×6 truck EW system. Algeria acquired the Chinese EW system in September, to add to its Russian Krashuka-4 and the Avtobaza EW systems.