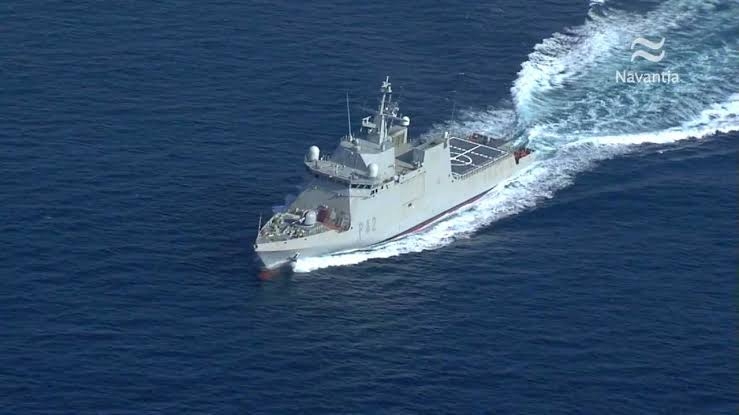 Rabat’s OPV design will be similar to the Buque de Vigilancia de Litoral (BVL) ordered along with four POVZEE / Avante 2200 Combatants by the Bolivarian Navy of Venezuela back in 2005.

Spanish bank Santander Group has provided $92 million loan to Morocco for the procurement of an offshore patrol vessel (OPV) from Spanish shipyard Navantia.

Morocco signed the agreement with Santander Bank on 31 August this year to finance the commercial agreement between the National Defence Administration and the company Navantia.

Rabat expressed interest on Navantia’s OPV in early 2020, but a political issue involving Morocco’s plans to expand its territorial waters in to Spain slowed down the negotiations.

Subsequently, in January last year, the Royal Moroccan Navy signed a contract with Navantia for two Avante class offshore patrol vessel. The two vessels would cost around 260 million euros, including a maintenance agreement.

Rabat’s OPV design will be similar to the Buque de Vigilancia de Litoral (BVL) ordered along with four POVZEE / Avante 2200 Combatants by the Bolivarian Navy of Venezuela back in 2005. The Avante 1400 class OPV can accommodate a crew complement of 35 sailors, and according to Navatia, will represent one million hours of work for the shipyard and 250 jobs over the next three and a half years as design and construction commences.

Armament will comprise 76 mm and 35 mm cannons as well as 12.7 mm machineguns. Helicopters and small boats will be able to operate off the aft deck.

The ships are able to carry out a wide variety of missions such as coastal surveillance and protection, protection of maritime traffic, health assistance to other ships, external firefighting, the fight and control of marine pollution, transport of personnel and provisions, search and rescue operations, rapid intervention, frogmen support, surface defence and passive electronic warfare.