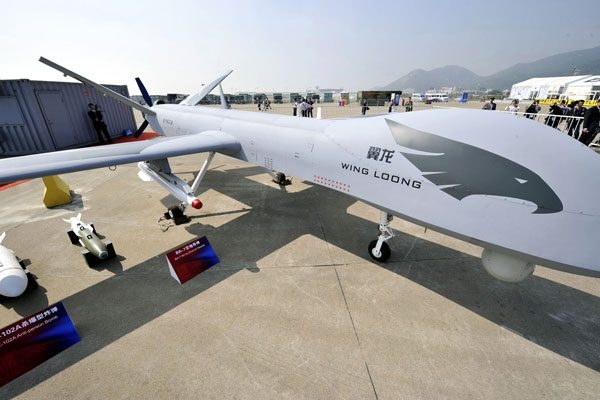 In an unprecedented drone acquisition spree, the Moroccan military has procured an unspecified number of Wing Loong II medium-altitude, long-endurance unmanned aerial vehicles (UAVs) as part of its continuing effort to bolster its capabilities.

The Wing Loong II is an upgraded version of the Wing Loong, was unveiled at the Beijing Aviation Expo held in September 2015. More than 100 UAVs have been delivered to a number of countries as of November 2019. Independently designed and produced by the Aviation Industry Corporation of China. It is equipped with electronic reconnaissance and communication equipment that can obtain and send back high-resolution images on time. It can also carry small air-to-ground precision attack weapons. Wing Loong-2 is able to conduct both reconnaissance and strike missions.

Morocco’s use of unmanned aerial vehicles (UAVs) has been a subject shrouded in secrecy since the country first acquired drones in the late 1989 when it acquired 18 BAE Systems SkyEye drones. The country has since been keen on pursuing improved drone capability for its military to bolster its counter-insurgency capacity, as well as for border surveillance with Algeria.

In April 2021, Moroccan forces used its newly acquired Wing Loong I UCAV to assassinate the chief of the Polisario head of the Gendarmerie in the disputed Western Sahara, which drew attention to its drone program. Since then, Morocco has gone ahead to acquire a divers plethora fo unmanned systems.

Also in 2021, Israeli IAI supplied there Harfang (also considered Heron drones) to Morocco, as part of a $48 million arms deal.

The Moroccan Air Force also purchased 13 Bayraktar TB2s from Turkey for an estimated 70 million USD, taking delivery of the first drone in September 2021. These was followed by Hermes 900 reconnaissance UAVs from Israel and perhaps more surprisingly, an Israeli ThuderB and WanderB loitering munitions that are to be manufactured in Morocco.

Furthermore, in December 2020, U.S. President Donald Trump moved forward with $1 billion in sales of drones and precision-guided weapons to Morocco sending a notice to Congress about the potential deals. The deal includes four MQ-9B SeaGuardian drones made by privately-held General Atomics, and Hellfire, Paveway and JDAM precision-guided munitions made by Lockheed Martin, Raytheon and Boeing. The unmanned aircraft will most likely monitor rebels in the Western Sahara.