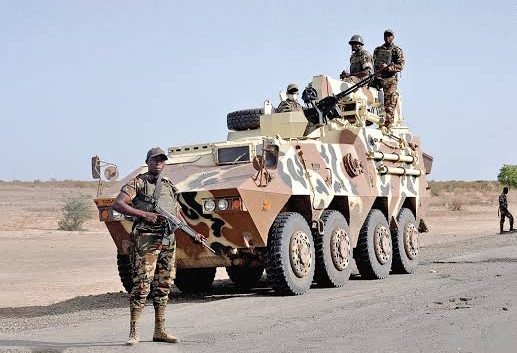 Jihadist group affiliated with Jama’at Ahlis Sunna Lidda’awati-Jihad (Boko Haram) terror group on the night of 21-22 October sacked Cameroonian soldiers from a forward operating base (FOB) in Djibrilli, near the Nigerian border.

The attack once again raises questions about Cameroon’s military capacity to effectively manage the insecurity amid cuts to military spending, in addition to sending more of its troops to the conflict in the country’s Anglophone regions.

From their base in the Mount Tagoshe range, jihadists use the villages of Marawa, Hyawa and Degbawa, as well as the surrounding region to enter Cameroon. And for the moment, the Cameroonian army is battling difficult road conditions due to the rainy season in their attempts to recover the weapons from across the border.

In this recent attack, Boko Haram forces were able to seize control of the 42nd Motorised Infantry Brigade’s command post in this area, located near Ashigashia, in the Mayo-Moskota district of the Mandara Mountains. The jihadist captured several types of small, medium, heavy and long-range weapons, including 14.5 mm and 20 mm anti-aircraft guns.

Djibrilli FOB in recent years have been attacked multiple times, on 14 November 2019, Boko Haram soldiers stole 120 mm and 81 mm mortars, which can be used to make improvised explosive devices.

From a military standpoint, the 14.5 mm and 20 mm anti-aircraft guns seized by Boko Haram will portend a strategic challenge for security forces in the region, because the jihadists will use them for long distance attacks in ground firing mode against infantry and mechanized forces, and also to hold low-flying attack aircraft at risk.

Cameroon military spending/defense budget for 2020 was $0.39B, a 6.87% decline from 2019, representing 1.01% of its annual GDP. Although, Military Expenditure in Cameroon increased to 443.30 USD Million in 2021 from 393.30 USD Million in 2020. Nevertheless, this is still grossly insufficient to cater for its military requirements.

On one hand, the Cameroonian Army infantry already lacks sufficient armoured vehicles, which is preventing them from carrying out long-range patrols. Also, racketeering, corruption, and human rights violations are making them lose the populace’s support. These factors help Boko Haram gain more ground.

While on the other, the Cameroon Air Force (French: Armée de l’Air due Cameron, AdAC) is facing significant capability deficits, its aircraft have fallen into disrepair following the country’s inability to pay for maintenance services.

Cameroon’s Air Force operates a fairly outdated and ageing aircraft fleet, with a focus primarily on transport and utility. None of its six Atlas Impala jet trainers purchased from South Africa in 1997 is operational.

Out of its six Dassault/Dornier Alpha Jets, 2 are currently inoperable. The Alpha jets are the tip of the spear for the Air Force and are armed with canons and unguided rockets.
The newest combat-capable airframe is four Z9WE attack helicopters based in Bamenda’s Aerienne 202 airbase. Each Z9WE are armed with eight HJ-8 anti-tank missiles or 57mm rocket launchers, or a mix of both. One was lost to a crash in 2020.