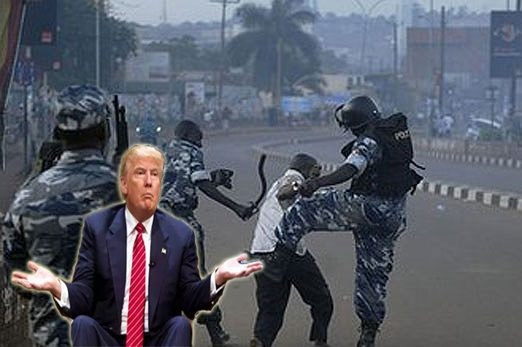 A Washinton official disclosed that “We do not take these measures lightly, but we will not shirk from reducing assistance further if evolving conditions require it,” and that “For the time being, other programmes will continue.”

Members of the BIR, an elite force that has received various type of assistance from the United States, equally the US donatied a Cessna 208 ISR to the Cameroonian Air Force.

On October 2015, at the invitation of the Cameroonian government, President Barack Obama said 90 military personnel will be deployed to Cameroon ahead of the arrival of additional troops “to conduct airborne intelligence, surveillance, and reconnaissance operations in the region”.

“The total number of US military personnel to be deployed to Cameroon is anticipated to be up to approximately 300, (along with the MQ-9 Reaper surveillance drones)” Obama said.

Deputy Director for advocacy and government at Amnesty International, Adotei Akwei, has urged the United States to suspend “all security assistance until the Cameroonian government can show it has not been utilized to commit serious violations of international law and persons responsible have been held accountable.”

The official warned that “We emphasize that it is in Cameroon’s interest to show greater transparency in investigating credible allegations of gross violations of human rights security forces.”

“We have informed the Cameroonian government that lack of progress and clarity about actions undertaken by the government in response to credible information of gross violations of human rights could result in a broader suspension of U.S. assistance,” Candice Tresch said.

She further announced that Washington “will not shirk from reducing assistance further if evolving conditions require it,” the State Department said.

The Chinese government has signed a military assistance agreement with Cameroon, the agreement includes a donation of CFA4.5 million (USD8 million) to Cameroon’s military for the purchase of military equipment.

The donation was announced by the said the Chinese Ambassador to Cameroon, Wang Yingwu on behalf of the Chinese government during a meeting with the Cameroonian Defence Minister Joseph Beti Assomo. On 18 July.