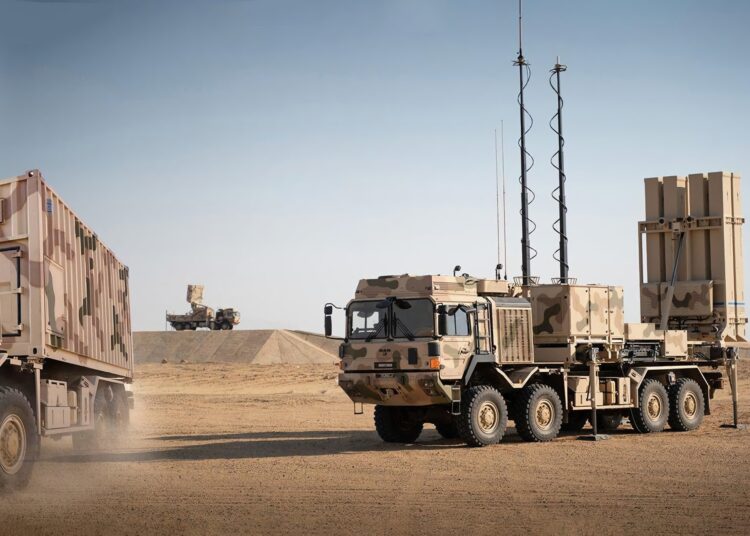 Germany has sent a consignment of IRIS-T surface-to-air defence system initially meant for Egypt to Ukraine to protect critical assets following the Russian invasion of the country.

The medium-range air defence system would have significantly boosted the Egyptian Air Defense Forces by having a layered and integrated air defence network coverage against any aerial threats within different ranges/altitudes, however, this capability will now be passed on to Ukraine.

A convoy carrying the IRIS-T system was seen heading in the direction of Ukraine’s capital on 12 October, it is not certain the version Germany handed over to Kiev, nevertheless, the air defence system will now join the recently received NASAMS networked short- to medium-range air defence system developed by Kongsberg Defence & Aerospace (KDA), and other Soviet-origin anti-aircraft systems in service with Ukraine, as the country battles to keep the Russian invaders at bay.

Egypt paid for the IRIS-T air defence system in 2019 after Germany’s Bundestag’s Budget Committee gave its approval for an export credit guarantee for six A-200 vessels, thereby clearing a path for the frigate deal to go ahead. The export credit provides guarantees of up to 2.3 billion euros for the transaction.

Former Minister of Economy Peter Altmaier sent a letter about the deals on December 7 to Bundestag President Bärbel Bas, a day before the swearing-in of Chancellor Olaf Scholz. The arms sales agreements were approved by the Federal Security Council, which includes not only the chancellor but also several ministers, such as the minister of finance. The Finance Minister under the previous Merkel-led government was Scholz, meaning Germany’s new chancellor was aware of the agreements.