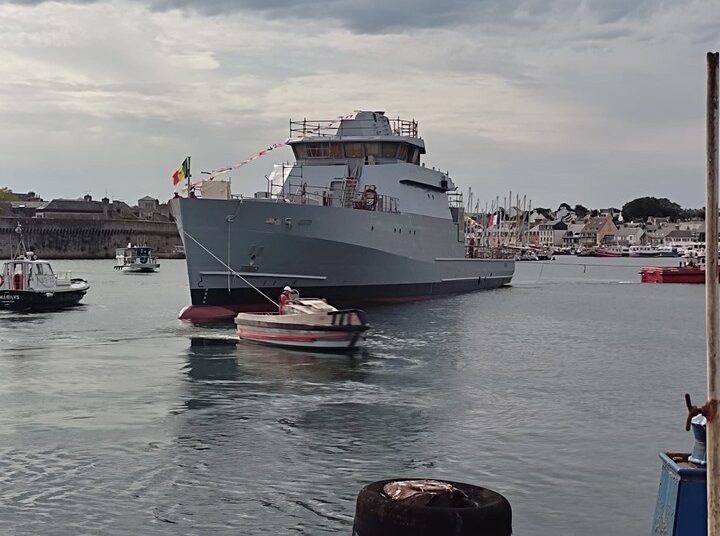 NIANI; the second ocean-going missile-armed patrol vessel for the Senegalese Navy, has been launched in Concarneau on September 13, 2022, by French Piriou Shipyard. This stage marks a significant step in the progress of the programme for the supply of three offshore patrol vessels.

According to Vincent Faujour, Chairman of the PIRIOU Group, “It is an important event for this boat but also more broadly for the OPV58S programme! Thanks to the motivation of the PIRIOU and KERSHIP personnel and the continuous working partnership with the representatives of the Senegalese Naval Staff, we are progressing according to schedule.”

Niani was floated out on 2 February by Kership, a joint venture between Piriou and Naval Group and was moved to Concarneau where alongside the first vessel of its class ‘Walo’ will be outfitted with its armament, sensors, and propulsion system.

The OPV 58 S is part of the Senegalese Navy fleet recapitalisation efforts which began in 2019. This acquisition was first unveiled during the Africa Maritime Security Forum  (AMSF 2020) held between 20th – 22nd January 2020 in Dakar, Senegal.

The first vessel of the OPV 58S class was launched in September last year, eleven months after the steel cutting ceremony was held in Concarneau Flag of France.

Construction of the vessel will take place over 44 months, and conclude in mid-2024. Work on the hulls is split between Concarneau and Lanester, near Lorient, where the Kership shipyard is located. The first vessel is expected to be delivered in 2022, with the other two units scheduled for delivery in 2023 and the 3rd vessel scheduled for 2024.

In addition to these three OPVs, Senegal is also procuring Shaldag MK II Fast Patrol Craft and two OPVs from Israel. The naval vessels will help the Senegalese Navy in securing the sea lanes and maritime approaches in Senegal’s littoral and exclusive economic zones.