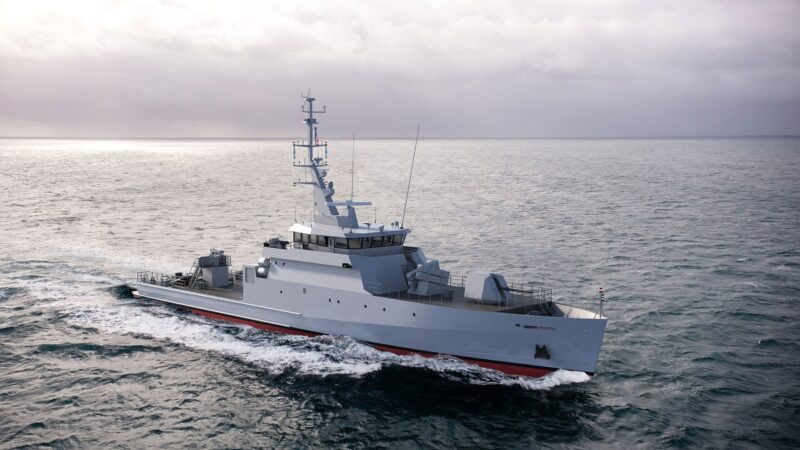 Eleven months after the steel cutting ceremony was held in Concarneau Flag of France, the first of three missile-armed OPV 58 S for the Senegalese Navy is now in the fitting-out stage.

The cutting ceremony was attended by General Birame Diop, Chief of the General Staff of Senegal’s military, and Admiral Oumar Wade, Chief of Staff of the Senegalese Navy.

The vessel will be launched in 2022, with the other two units scheduled for delivery in 2023 and the 3rd vessel scheduled for 2024.

The OPV 58 S is part of the Senegalese Navy fleet recapitalisation efforts which began in 2019. This acquisition was first unveiled during the Africa Maritime Security Forum  (AMSF 2020) held between 20th – 22nd January, 2020 in Dakar, Senegal.

Senegal has placed order for a plethora on naval patrol boats including four Shaldag Mk II vessels from Israel, and a single Shaldag Mk V, two RPB 33 patrol boats from Raidco Marine, both patrol boats are currently being built at the UFAST Shipyard.

The OPV 58 S are 62 metres long, 9.5 metres wide and have a maximum draft of 2.9 metres. They are built with a steel hulls and aluminium superstructures with a 360 degree panoramic bridge.

The vessels are able to accommodate up to 48 people, including 24 crew members.