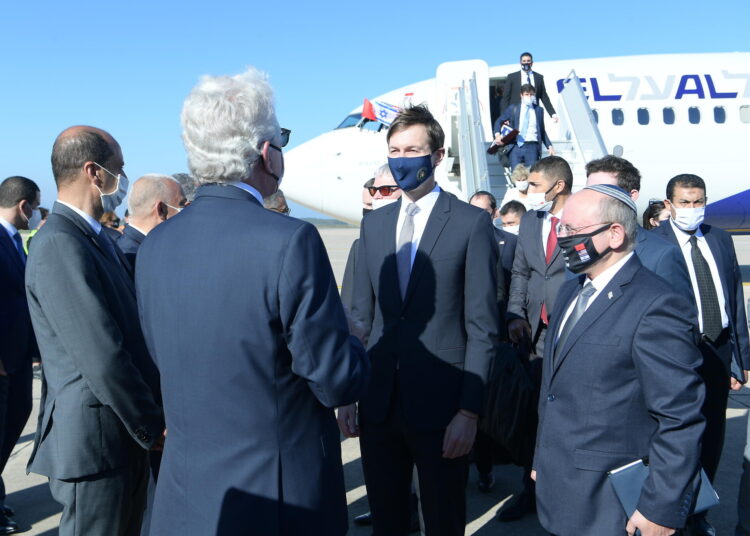 A joint Israel-US delegation, led by Meir Ben-Shabbat (right) and Jared Kushner (center) is greeted on landing in Rabat, after the first direct flight between Israel and Morocco, December 22, 2020 (Amos Ben-Gershom/GPO)

The Moroccan army on Monday confirmed that its personnel will participate in an international military conference in Israel this week, highlighting the solid relationship with Israel.

A military statement said a delegation led by Inspector General of the Royal Armed Forces, Lt. Gen. Belkhir El-Farouk, is taking part in the conference in Tel Aviv on Sept. 12-15.

“Participation in this international conference aims to exchange knowledge and expertise between the participating armies,” the statement said.

“It will lay the foundations for solid cooperation in the field of multi-dimensional defense and military renewal,” it added.

Last week, the Israeli army said dozens of army leaders would take part in the conference, including Arab countries.

In 2020, Israel and Morocco announced the resumption of bilateral diplomatic relations, after their suspension in 2000.

Israel signed a defence pact with Morocco in November Last year, amid plans to advance national security interests with Arab countries that have drawn closer to it. Israeli Foreign Minister Yair Lapid travelled to Morocco in August 2021 for the first visit by Israel’s top diplomat to that country since 2003.

Subsequently, Morocco and representatives of the Israel Aerospace Industry (IAI) signed a Memorandum of Understanding (MoU) covering the aeronautical sector as part of the implementation of the December 2020 Joint Declaration between Morocco and Israel.

Since normalized relations with Israel, the north African country has acquired defence hardware from Israel worth several tens of millions of dollars, says an end-of-the-year report by IAI. Morocco will now receive Barak MX air defence systems in a deal worth over $500 million from Israel Aerospace Industries (IAI).

Rabat is also in talks with Israel to acquire the Delilah cruise missile to equip its existing fleet of F-5 fighters. Delilah cruise missile system is developed by Israeli weapon manufacturer Elbit Systems. If the contract goes through, Morocco will be able to accurately hit land and sea targets at a 250 km distance.