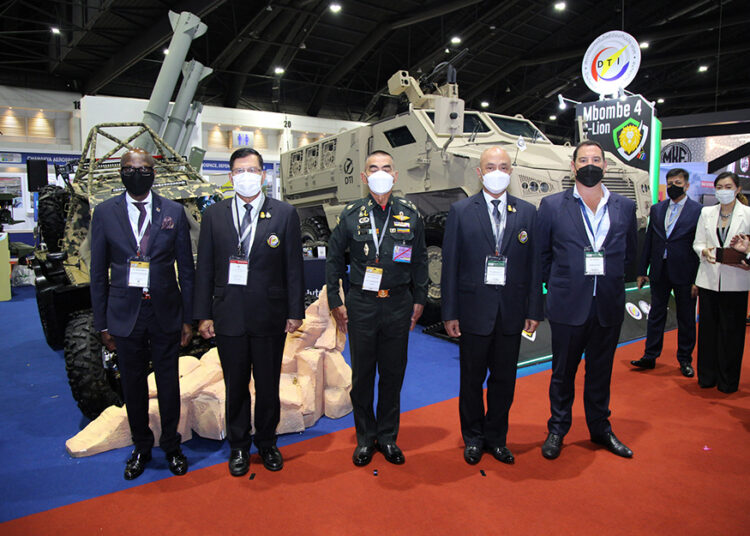 Thailand’s Defence Technology Institute (DTI), Paramount Group and Jatunapas; one of Thailand’s leading defence and security companies has announce a partnership with South Africa’s Paramount Group, and local defence company Jatunapas to produce the Mbombe 4 armoured vehicle as the D-Lion.

Paramount made the announcement to coincide with the Defence and Security 2022 exhibition in Bankok, Thailand, saying it has partnered with Thailand’s Defence Technology Institute (DTI), Thailand’s defence research and development (R&D) agency, and local partner Jatunapas, one of Thailand’s leading defence and security companies.

The Mbombe 4 variant, D-Lion, is to undergo trials following assembly of the Mbombe 4 in Thailand, with the Thai armed forces and DTI. A prototype of the D-Lion, was unveiled at the Defense & Security 2022 show in Bangkok on 29 August.

At a ceremony held at Defence and Security 2022, the locally assembled ‘D-Lion’ (the name of the local variant) was officially handed over to General Chalermphon Srisawasdi, Chief of Defence Forces, Royal Thai Armed Forces by Director-General Choochart Buakhao of DTI, and witnessed by General Porpol Maneerin, the Chairman of DTI and Thabang Makwetla, South Africa’s Deputy Minister of Defence and Military Veterans. Also in attendance were Eric Ichikowitz, Senior Vice President of Paramount Group, and Ploynapas Chaiyasree, CEO of Jatunapas Company Limited.

“The D-Lion combat vehicle which has been assembled in Thailand through the co-operation of DTI, Jatunapas and Paramount Group represents a first-of-its-kind in this level of combat capability. South Africa is globally recognized for its leading competence in this vehicle class, whilst Thailand has significant competence in vehicle production,” Chaiyasree said.

“This project embodies the policy of the Thai Government to promote local production, at the highest level, with a platform that represents the most technologically advanced combat capability. It will provide the Royal Thai Armed Forces with the ability to address the ever challenging combat environment. Paramount Group believe in Thailand as an export producer as witnessed today with the hand-over of the first Thai assembled platform.”

Exports to countries in Southeast Asia will also be targeted.

Ichikowitz said that, “Southeast Asia is primed for strong growth in the defence and security industry, however the region has not been immune to the continued constraints on global supply chains among the economic aftershocks of the COVID-19 pandemic. An indigenous defence manufacturing supply chain is uniquely critical to both the ASEAN economy and Thailand’s national security, ensuring readiness in the face of known and unknown threats, while emboldening a sustainable lifecycle of high-skills economic growth in the process.”

“We are privileged to partner with DTI and Jatunapas to bolster local manufacturing capabilities through the production of the formidable Mbombe 4. We are looking forward to building this partnership and that with the Thai government, from this milestone,” he said.

“With more than 150 vehicles either being manufactured or on order for delivery or deployment across Africa, Asia and around the world, this announcement in Thailand is an important next step in the Mbombe’s continued expansion, and a testament to the innovative partnerships that we have fostered to the benefit of our partner nations’ respective defence industrial complexes. We are pleased to say that the Mbombe 4 is ready for production in Thailand as of today,” Ichikowitz added.

The 16-tonne Mbombe 4 can be equipped with various weapon systems and loaded with ammunition, crew, and supplies. The vehicle has a payload capacity of 2.3 tonnes, an operating range of 800 km, and a burst speed of 140 km/h. Since its launch in 2019, the Mbombe 4 has been ordered by five nations, including the United Arab Emirates, Togo, and India to equip their armed forces – it is being built in large numbers for the Indian Army by Bharat Forge as the Kalyani M4.

Paramount Group revealed in October last year that a new add-on armour package bolstered the armour protection of the vehicle to full NATO STANAG 4569 Level 3 for ballistic protection, with certification being provided by South Africa’s Armscor.