IDEX2021: Paramount and Bharat Forge to produce the Mbombe 4 in India as Kalyani M4 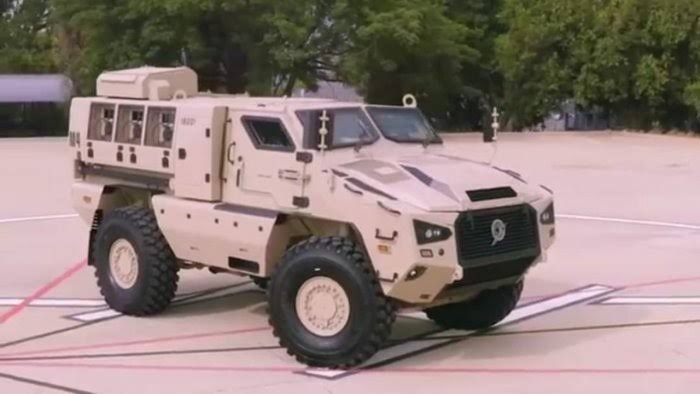 South Africa’s Paramount Group and India’s Bharat Forge Limited have agreed on building the Mbombe 4 armoured vehicle in India as the Kalyani M4. The agreement was signed at the International Defence Expo (IDEX) held in Abu Dhabi.

In February 2020, at the DefExpo in India both companies unveiled the Kalyani M4/Mbombe 4 and Kalyani Maverick. The United Arab Emirates is the launch customer for Mbombe 4 armoured vehicle, with four vehicles ordered in 2019.

Paramount and Kalyani in a joint venture designed the M4 armoured vehicle as a version of the Mbombe 4 mine-resistant ambush-protected (MRAP) vehicle, to be marketed in India.

“It is intended that the Kalyani M4 will see service with the Indian Armed Forces in the very near future,’ Bharat Forge announced in a statement on 22 February during the IDEX defence and security exhibition in Abu Dhabi. However, Bharat didn’t provide details on quantity.

A request for information issued by the Indian Army in November 2019 for the supply of 198 wheeled armoured vehicle saw the Mbombe 4/Kalyani M4 competing against Indian-designed and built 8×8 Tata Kestrel (also known as the WhAP – Wheeled Armoured Platform) and several other platforth including Maverick APC from Paramount and the Werewolf mine-resistant ambush-protected vehicle from Namibia-based Windhoeker Maschinenfabrik.

“The Kalyani M4 successfully completed a series of extreme vehicle trials in some of the toughest environments in India.” says Paramount.

According to Paramount, the Kalyani M4 is a multi-role platform, designed to meet the specific requirements of armed forces for quick mobility in rough terrain and in areas affected by mine and IED threats. It offers ballistic and blast protection – up to 50kg TNT side blast or IED/roadside bombs.

Amit Kalyani, Deputy Managing Director, Bharat Forge Ltd, said, “We are very pleased to partner with Paramount Group. This collaboration brings together the manufacturing and technology excellence of two leading companies, which have matching synergies and complementary capabilities. The Kalyani M4 is a fantastic new generation vehicle, and we want to position it as the ‘future of protection’ in all markets world-wide.”

Ivor Ichikowitz, Chairman of Paramount Group, stated: “All of our technologies have been developed with portable production in mind. We believe this model of world-beating innovative technology is fundamental to enhancing any country’s contemporary defence, and technology capabilities. The Kalyani M4 is based on one of our flagship armoured vehicles designed specifically for in-country production in India with our partners the Kalyani Group. We are proud that it will be made in India.”