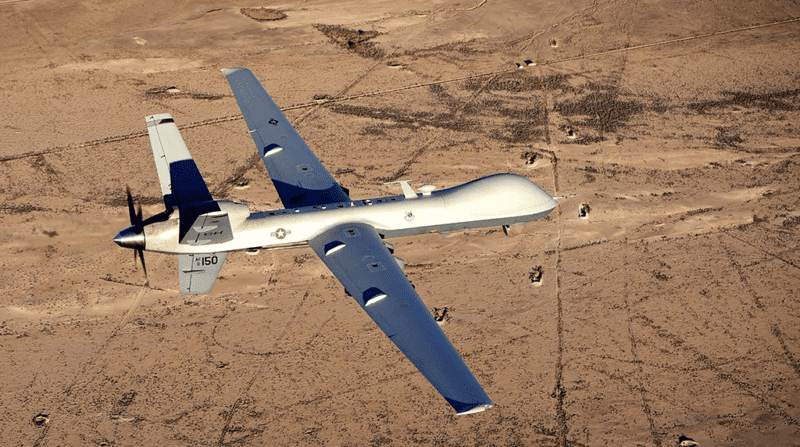 Forces of the Libyan National Army (LNA) earlier this week shot down what appears to be either a Predator or Reaper drone.

The downing occurred today, August 22 near Bengazi. The drone was brought down with a man-portable surface-to-air missile system (MANPAD).

According to an official by LNA’s Major General Khaled via his affiliated Facebook account, when translated explains that;

“The air defense media of the General Command targeted an unidentified filming drone that entered the skies of Benghazi near Al-Rajma and the Benina base and brought it down.

Subsequent footage released shows what appears to be the drone burning and slowly falling to the ground after being hit by a surface-to-air missile.

Although, the downed drone was burnt beyond recognition on impact, therefore, it may likely be a Chinese Wing Loong, CH-5, or Ch-4 UAV since they all appear similar. However, the landing gear mechanism and engine housing appear very similar to those of the MQ-9 Reaper UAV.

Any of these NATO countries may have been carrying out surveillance of LNA or Russia’s Wagner groups’ activities in the area without prior authorization from the Libyan government.

As part of its fiscal 2021 budget request, the USAF intended to cut MQ-9 Reaper production after buying just 24 units in 2021, -thereby cutting the total buy to 337 aircraft, and also ending some air patrols in the Middle East and North Africa (MENA), and shutting down the production line.

However, that decision did not sit well with the military leadership.
Central Command (CENTCOM) Commander, U.S. Marine Corps Gen. Kenneth McKenzie told the House Armed Services Committee at the time that CENTCOM still has a “genuine requirement” for the reaper in its counter-terror operations and most importantly, keeping an eye on Iran’s activities on the Strait of Hormuz.

McKenzie noted that, even though drones are now vulnerable to the increasingly sophisticated Iranian air defense systems, however, the intelligence gathering capability of the Reaper drone is still essential today more than ever.

“We would like to see if there’s a way to keep those in theater and continue to use them,” McKenzie said referring to the MQ-9s.

Likewise, U.S. Africa Command (AFRICOM) Commander Army Gen. Stephen Townsend told the committee that while the Air Force’s needed to have assets for a high-end fight, “the lower-end stuff works really well for us in AFRICOM and CENTCOM.”

Will Roper, Air Forces’ acquisition boss told the members of the House Armed Services tactical air and land forces subcommittee on March 10 that although the Reaper has been a great platform for the United States, however, “we just can’t take them into the battlefield. They’re easily shot down, Especially now that the US is looking towards “high-end fights.”

According to Roper, “there are things that are more high-end, military-unique things that are meant to be able to survive even in a contested environment. Obviously, a lot of technology will have to go in and they’ll be likely expensive systems.”

In 2019, and-9A Predator B unmanned aerial vehicle (UAV) belonging to the Italian Air Force crashed on November 20 over the town of Tarhunah in western Libya.

The MQ-1C Gray Eagle drone was lost after suffering a mechanical failure, according to a March 2 statement by AFRICOM.