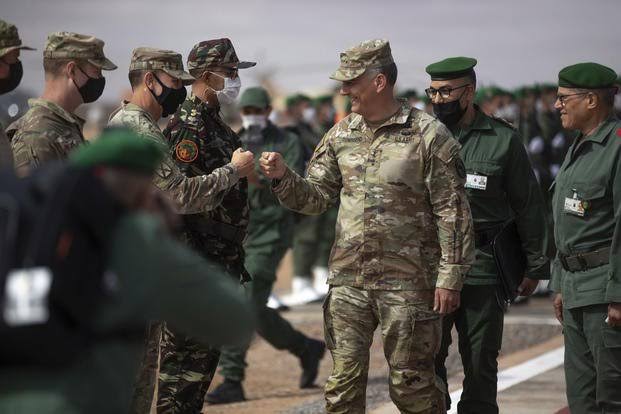 The United States has issued a waiver that will allow it’s defence funds to support Morocco’s participation in joint military exercises, after the administration of President Joe Biden moved to clear a hurdle to the relationship put in place by Congress last year following concerns over Western Sahara.

“The Secretary of Defense has just signed a waiver that allows U.S. Africa Command to continue cooperation and training with Morocco,” Bardha Azari, a spokeswoman for US Africa Command, told Middle East Eye.

“Our military partnership with Morocco is strong, and we are confident this unshakable partnership will continue to flourish in the years ahead,” she added.

Morocco is a major non-Nato ally and a close partner with Washington on counterterrorism operations. It participates in more than 100 military exercises with the US each year. Along with Tunisia and Senegal, it co-hosts Africa Lion – the largest military exercise in Africa.

‘The fact that funding for military exercises has now been waived is a signal… I think it will speed up the process of arms sales’ says Edward Gabriel, former US ambassador to Morocco

Last year, U.S. Congress passed an amendment to US defence legislation, known as the National Defense Authorisation Act (NDAA), that sought to limit funds supporting Morocco’s participation in any multilateral exercise administered by the Department of Defense.

The amendment allowed for funds to be released only if the secretary of defence, in coordination with the secretary of state, certified Rabat was committed to pursuing a “mutually acceptable political solution in the Western Sahara”.

The amendment also included a carve-out allowing a waiver to be issued on national security grounds.

The move was led by Democratic Senator Patrick Leahy and Republican Jim Inhofe over the Trump administration’s recognition of Morocco’s claim of sovereignty over Western Sahara in exchange for Rabat’s normalisation of ties with Israel.

Following Russia’s invasion of Ukraine, the Biden administration has been making moves to improve its relations with its Middle Eastern and North African allies. US Deputy Secretary of State Wendy Sherman visited Morocco on Tuesday as part of a long-planned trip to the region.

The meeting was an opportunity to reiterate the commitment to the long-standing relations between Morocco and the United States that date to the Treaty of Peace and Friendship in 1787. They emphasized that the strategic bilateral partnership between Morocco and the United States is rooted in shared interests in regional peace, security, and prosperity. They also discussed areas for future U.S.-Moroccan cooperation.

They discussed the importance of promoting and protecting human rights and fundamental freedoms and building on the productive Morocco-U.S. dialogue on human rights held in September 2021, which serves as the main platform to discuss all human rights related issues.

The Minister and the Deputy Secretary expressed their intent to continue cooperation on issues of common interest such as regional peace and prosperity, and the development of Africa and regional security. Deputy Secretary Sherman emphasized the crucial role played by the Kingdom of Morocco in maintaining regional security and stability as well as its contribution to peace and prosperity in the Middle East.