NAF A-29 Super Tucano pilots are using simulators for training 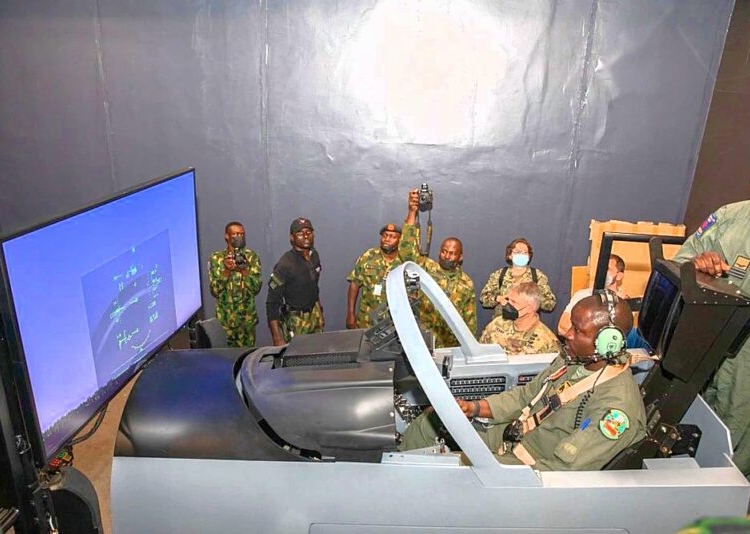 The United States has supplied A-29 Super Tucano full flight simulator to the Nigerian Air Force (NAF) as part of the $500 million deal for the aircraft.

The A-29 Super Tucano is a multi-role, fixed-wing aircraft that provides the Nigerian air force with an indigenous counter-insurgency, ISR, and close air support capability.

Developed by Embraer, the A-29 Super Tucano full flight simulator will be integrated into a realistic environment for a networked, collaborative air-land training regimen for the Nigerian Air Force airmen.

The full flight simulator is a part of the $500 million U.S. foreign military sale to Nigeria, which also includes the delivery of the 12 A-29 Super Tucano aircraft, munitions, and world-class training.

Last week Tuesday, 15 February, United States Ambassador, Beth Leonard, and a brigadier general in the U.S. Army, Thomas Tickner, visited the NAF airBase in Kainji, Niger State, to break ground on the final phase of the $38 million construction project for the A-29 Super Tucanos’ support facilities which included the flight simulator annex.

They were joined by the Deputy Director for the Air Force Security Assistance and Cooperation Directorate, Ronald Taylor, and senior officers of the Nigerian Air Force (NAF).

Kainji, around 100 km (60 miles) from the border with Benin is a major hub for the Nigerian Air Force A-29 operations and is presently home to the 407 Air Combat Training Group.

“The construction site will be the location of several critical facilities, including sunshades to house the A-29 Super Tucanos, munitions assembly and storage areas, and an annex for the A-29 flight simulator,” said a statement on Wednesday from the U.S. mission in Nigeria.

“The U.S. Army Corps of Engineers (USACE) North Atlantic Division is overseeing the construction of this necessary infrastructure for the operation and maintenance of the A-29 Super Tucanos and their accompanying munitions.”

The new flight simulator will provide a cost-effective way for NAF pilots to practice combat missions. With simulator training, they can now refine their skills in a variety of different flight scenarios that can be tailored to their specific goals.

The simulator cost of a fixed wing FTD is largely dependent on a customer’s configuration and options chosen. A FTDs generally start at around $300,000 for a piston aircraft and $700,000 for a turboprop or jet aircraft.

Training with an FFS usually includes all aspects of operating the A-29 including, but not limited to: ground operations, start-taxi-take offs, landings, formation flying, weapons employment, threat reactions, air-to-air refueling, and other critical capabilities.

The ability to carry out this kind of training with a high degree of realism on the ground is especially important for the NAF, as it enhances training while also reducing strain on the aircraft as well as being cost-effective.

Caverton has also successfully carried out recurrent training for 4 pilots and is planning for additional training in the first quarter of 2022.