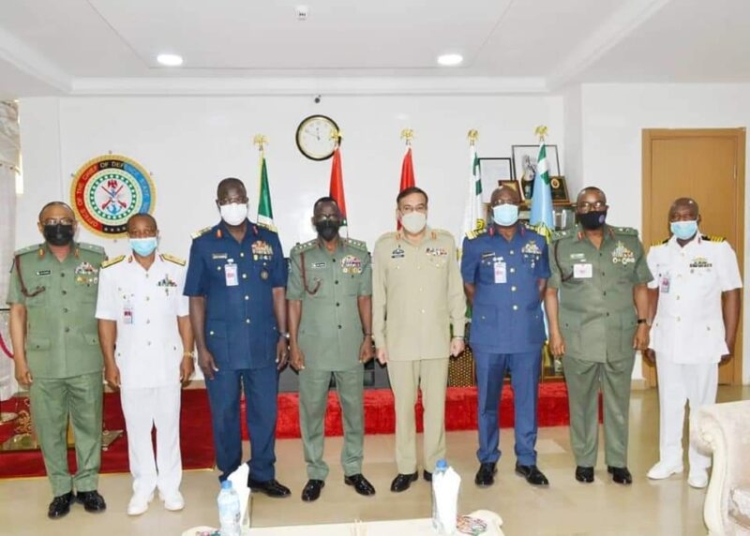 The Nigerian military has indicated interest to collaborate with the Pakistan Armed Forces (PAF) in the area of defense capabilities to further boost its operations.

The CDS stated that the AFN under his watch would further strengthen the long-existing strategic partnership with its Pakistani counterpart on human capacity building, acquisition of military platforms, and modern communication gadgets.

According to Gen Irabor, “Pakistan stands a good ground for us (AFN) to improve on our defense capabilities”

Gen Raza added that AFN and PAF could also collaborate in the area of defense production capabilities which include manufacturing of armored tanks, small arms, and ammunition, communication equipment amongst others.

In the area of defense procurement and military training, Nigeria and Pakistan already have a synergistic relationship.

At the global level, Nigeria renames one of Pakistan’s biggest partners in terms of bilateral relations.

Also, in 2017, about 450 Nigerian soldiers including special operators were trained by Pakistan as part of the country’s gestures to help Nigeria tackle insurgency and terrorism. Additionally, Nigeria and Pakistan in 2018 agreed to strengthen military cooperation, in training and intelligence, radio communication, and logistics support among other areas.

In the area of aviation, Nigerian Air Force, NAF received a dozen Super Mushsak aircraft from Pakistan to enhance its training and operational efficiency. The Super Mushsaks was trailed by the delivery of three JF-17 Thunder fighter jets.