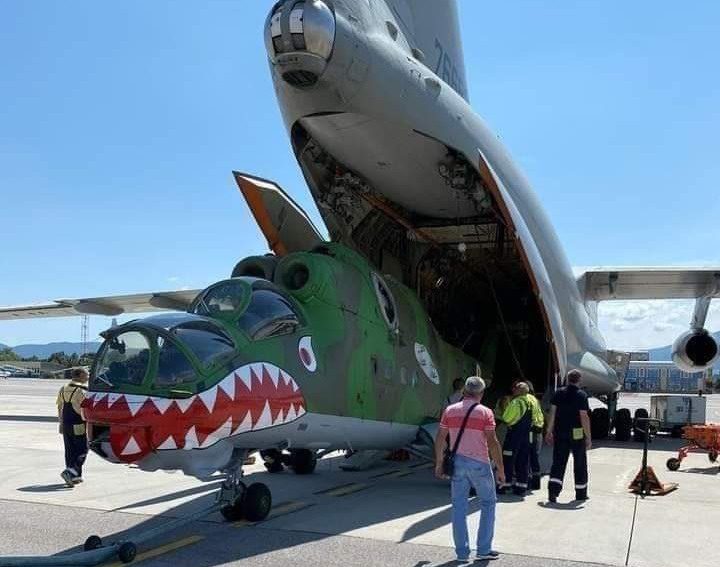 A second Mil Mi-24 attack helicopter has been delivered to the Ivorian military to enhance its combat capabilities.

The new Mi-24 attack helicopter, is part of an order for two of the type to replace those that crashed in 2019 and 2020.

This second helicopter (TU-VHT) was delivered aboard an Ilyushin Il-76 transport aircraft. It was earlier seen in Bulgaria on 27 January ahead of delivery.

While the first Mi-24 Hind attack helicopter was received on 7 August 2020, arriving at Abidjan airport aboard a Ukrainian Air Force Il-76 transport aircraft.

At that time, the Ivorian President Alassane Ouattara said the second hind will be delivered in three months time. They will be operated by the Escadrille de Chasse (attack squadron) based at Base Aérienne de Abidjan/Port Bouet.

The two Mil Mi-24 “Hind” attack helicopters are attrition replacement for two lost few months back. On 27 November 2019, an Mi-24D (TU-VHR) was lost after a collision with an Presidential Mi-17 serial TU-VHM that was parked on the ground at Katiola. The Mi-17 sustained slight damage and was repaired soon afterwards, while the Mi-24 was written off.

Recently, the Ivorian military also took delivery of two Mi-17 second hand Mi-8P transport helicopters, which will be used for medical evacuation duties as part of the country’s mobilisation efforts against the Coronavirus epidemic.

The two helicopters (TU-VHL and TU-VHN) were delivered in mid-March.