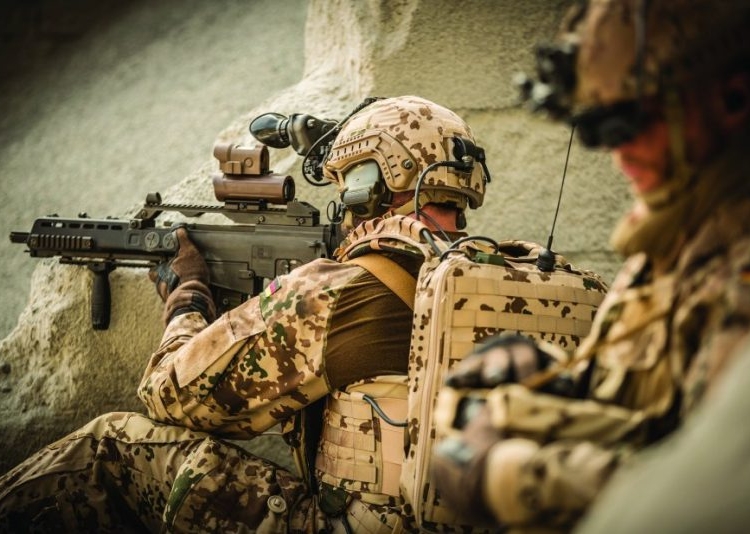 With experienced gained from having to fight terrorists in and around its border region, the Algerian Army has adopted the Rheinmetall Defence’ Gladius Future Soldier system, thereby joining a handful of African countries who have integrated such next-generation capability into their frontline infantry units.

The Gladius modular system provides soldiers with cutting-edge protective gear backed by a networked array of communication and navigation equipment. Once known as “Infanterist Der Zukunft” or “Future Soldier” and now called “Gladius” (Latin for sword) was designed for high-intensity warfare, as well as combat in the low intensity spectrum particularly in built-up areas.
Designing the Gladius soldier system, greater emphasis was placed in Increasing infantry’s combat effectiveness, improving command and control capabilities and survivability at the squad level, along this line. the Gladius future soldier system is optimized with weight reduction, miniaturization and enhanced situational awareness for a 10-man infantry squad as well as its associating vehicles tied in a network.

The base system is composed of a core computer which controls the power supply and command and control (C4I) functions, squad radio communication (data and voice simultaneously) which allows for the integration into networked operations; including secure link to the squad’s support or combat vehicle, batteries and GPS module. Additionally, the squad leader is equipped with a C4I system consisting of a portable touchscreen operated computer and a hand-held radio set, which receives and transmits both voice and data to the command structure.

Individual soldiers’ body armor is made of flame retardant gear, a ventilation shirt and insulating layers to stabilize body temperature, thus, offering protection from biological and chemical agents, as well as extreme climatic conditions.
What’s more, the helmet comes with a digital magnetic compass, headset, night goggles, an infra-red receiver module and a built-in display with augmented reality system. For better situational awareness and faster decision-making, the helmet display provides instant and comprehensive picture of the terrain and enemy positions and equipment to the squad leader.

Personal firearm of Infantry Soldiers fitted with the Gladius Future Combat system are usually outfitted with a spotting scope, thermal imager, laser light module and a range of other reconnaissance and weapon accessories. Whichever rifle integrated with the Gladius system, a variety of targeting and sighting devices is available for acquiring targets in daylight, at night or in poor visibility.