Modern Soldier: The Future of Ground Warfare in Africa 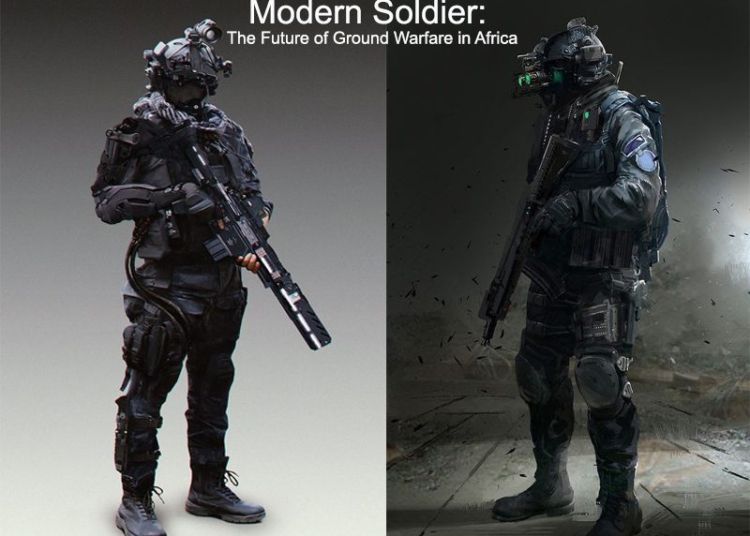 Many African armies now understand the importance of having a high-tech modern individual infantryman hence, they began their own “Modern Soldier” programs.

One underlying lesson of most African conflicts is that African soldiers are ill-equipped to fight small wars, as a result, they are unable to fight with agility, flexibility, speed, and rapid maneuver. The African battlespace poses specific requirements for defense planners and weapons manufacturers alike.

A greater part of the African continent is classed as developing and Africa has the fastest level of urbanization in the globe. Any new system must overcome a vast range of terrains, climates and a vast range of potential military opponents; starting from rebels but also including conventional militaries.

Since combat in Africa is considered to be largely intrastate, interspersed with semi-conventional inter-state conflict. These are largely fought by dismounted forces, supported by light and medium armored fighting vehicles, ‘Technicals’, RPGs and artillery.

Many African armies now understand the importance of having a high-tech modern individual infantryman hence, they began their own “Modern Soldier” programs. By applying some of the lessons learned during a conflict to their elite troops and special forces; bringing together innovative, off-the-shelf technology and state of the art military gear and equipment, they increase the overall lethality of the individual infantryman.

After all, soldiers are now benefitting from the move towards digital innovations. These days, many African soldiers deployed on the front lines now carry an array of high-tech gadgets designed to increase operational efficiency and safety, and in some cases, lethality. Their digital tools help them navigate unfamiliar terrains, interact with locals who speak different languages and track enemies during a firefight.

The high-tech soldiers in Africa

Many of the new innovations being brought on the battlefield to transform an individual soldier into a high-tech warrior include; lethal assault rifles, upgraded weapon sights, modular gear, more effective armor protection, cutting-edge networked communication, computer, and navigation gadgets.

Now, with helmets fitted with real-time positioning and information systems, thermal weapons sights, and computers embedded into their uniforms, soldiers are able to engage in combat assisted by satellite imagery of the battlefield and ballistic accuracy calculations.

The future of ground warfare in Africa will surely bring integrated smart weapons, lightweight full body armors made of more advanced materials, exoskeletons, and even cybernetic implants to the battlefields.

These are the most advanced high-tech soldiers in Africa.

Every soldier and vehicle is linked to a real-time network, in order to track individual soldier’s vitals, activities, and environment. Kombo would increase situational awareness as well as guarantee the soldier’s security.

In 2015, the Sudanese Military Industry Corporation (MIC) launched the development of new combat gear for soldiers of the Sudanese Armed Forces under the name of “Kombo” Future Soldier System. The program aims to provide the Sudanese individual soldier equipment with digital weapon equipment. To that effect, MIC developed the Integrated Soldier Combat System (ISCS or Kombo).

African Warrior was designed to be capable of operating effectively during Close Quarter Battles (CQB).

African Warrior concept was one of the South Africa’s landmark programs, designed to outfit infantry soldiers with a collection of high-tech equipment. African Warrior was designed to be capable of operating effectively during Close Quarter Battles (CQB).

The African Warrior concept is considered to be the most advanced in the continent, the goal was to increase fighting ability in urban warfare and other situations where large, armored vehicles and long-distance weaponry aren’t practical.

The core of the African Warrior Concept is the R4 rifle, a licensed copy for the IMI Galil. currently in use by the South African Defense Force (SANDF) as its main firearm. Although the baseline R4 will still continue in service, however, improved target effect requirements will be advanced, not just in terms of lethality against individuals or soft skin vehicles but effective engagement and neutralization of threats.

The most popular feature is its grenade launcher and Electro-Optical device which are mounted on a Picatinny rail on the R4 rifle. To enhance trooper’s combat efficiency, an Integrated Helmet System featuring a Command and Control (C2) technology as well as a Night Vision Goggle is fitted on the ballistic helmet.

The Gecko All-Terrain Vehicle is introduced to provide frontline troops with cargo carrying capability and also for special insertion and egress during clandestine operation.

This is a military camouflage pattern developed by the Council for Scientific and Industrial Research, it was designed with advanced camouflaged technology. The Soldier 2000 camouflage scheme offers a unique visual and thermal protection from the enemy, it is effective in all terrains and seasons encountered across South Africa.

The Egyptian Army Integrated Soldier System (EISS) was first showcased at the IDEX exhibition in Abu Dhabi in February 2019. It was developed by Arab International Optronics (AIO) which is owned 49% by Thales Group and 51% by the Egyptian government.

The EISS is integrated surveillance and aiming ensemble that provides images from different electro/optical devices to a head-mounted display (HMD) and links these optics to either the daylight scope of an RPG-7 or a targeting dot sight on a machine gun or assault rifle.

Each system has two assemblies: the commander and the soldier. The commander system has a helmet group consisting of a thermal sight and a single eyepiece HMD. In combat zones where power supplies might be destroyed or inaccessible, that’s could pose a challenge, hence power is provided by a belt-mounted rechargeable battery with a control switch.

The soldier system uses a helmet-mounted eyepiece to bring up images from the electro-optical sensors connected to the helmets, assault rifles, machine guns, and the daylight scopes of RPG-7 launchers.

It is expected that the Egyptian Army special operations forces (Unit 777 and unit 999) will soon be receiving the Integrated Soldier System. Although the EISS is heavily influenced by the Russian ‘Ratnik,’ however, the EISS only focus on making special operations soldiers more electronically integrated with their teams while the Russian Ratnik is focused on broadly evolving the capabilities and survivability of the average Russian infantryman.

With experienced gained from having to fight terrorists in and around its border region, the Algerian Army has adopted the Rheinmetall Defence’ Gladius Future Soldier system, thereby joining a handful of African countries who have integrated such next-generation capability into their frontline infantry units.

The Gladius modular system provides soldiers with cutting-edge protective gear backed by a networked array of communication and navigation equipment. Once known as “Infanterist Der Zukunft” or “Future Soldier” and now called “Gladius” (Latin for sword) was designed for high-intensity warfare, as well as combat in the low intensity spectrum particularly in built-up areas.

The base system is composed of a core computer which controls the power supply and command and control (C4I) functions, squad radio communication (data and voice simultaneously) which allows for the integration into networked operations; including secure link to the squad’s support or combat vehicle, batteries and GPS module. Additionally, the squad leader is equipped with a C4I system consisting of a portable touchscreen operated computer and a hand-held radio set, which receives and transmits both voice and data to the command structure.

An innovative auto-aim rifle technology is also being developed by Nigerian Army engineers.

Following the lessons learned while fighting Boko Haram, the Nigerian Army began a series of technology-driven initiative to provide troopers with sophisticated equipment to defeat the enemy.

Realizing that an incorrectly structured army, utilizing an ineffective and outdated doctrine and equipment, gives any threat-force an advantage whilst placing itself at a disadvantage, the Nigerian Army Chief of Army Staff; General Tukur Buratai unveiled the new Nigerian Army smart uniform which can send signals to the Command and Control network when an individual soldier is in danger.

Also, in order to provide better situational awareness, drones are being tethered to squad-sized troops to enables rapid battlefield decision making and adds to the initiative of junior commanders.

For enhanced lethality, the FB Beryl rifle chambered on the 7.63 x 39mm is being inducted. An innovative auto-aim rifle technology is also being developed by Nigerian Army engineers. Improved ballistic armour protection is also given to the Nigeria soldiers on the frontlines.